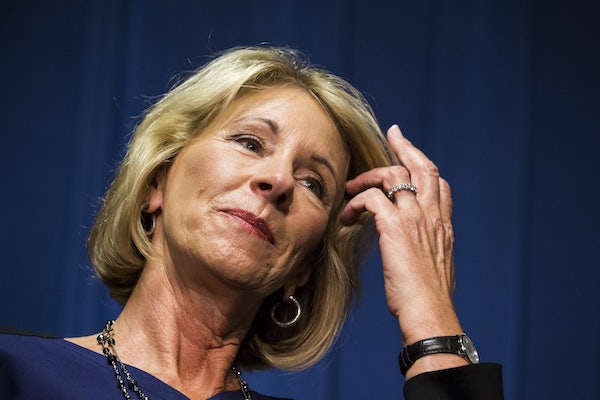 Betsy DeVos isn’t backing down from her grizzly bear gaffe.

President Donald Trump’s education secretary talked to Axios on Friday, attempting to do more damage control after her widely panned appearance before the Senate last month, in which she seemed to lack basic knowledge about America’s public education system and said that schools might need guns to fend off “potential grizzlies.” But in her latest comments, DeVos doubled down on that bizarre statement. “It was a valid illustration,” she told Axios. “It just probably wasn’t the best illustration I could have given.”

DeVos said she regretted not firmly agreeing that “K-12 schools receiving federal funding should be required to meet the requirements of the Individuals with Disabilities Education Act,” but then gave a muddled response on whether the federal government should have a role in schools. “It would be fine with me to have myself worked out of a job,” she said, “but I’m not sure that—I’m not sure that there will be a champion movement in Congress to do that.”

The statement suggested she agrees with many conservatives who favor abolishing the Department of Education. But then DeVos walked it back:

She said that a lot of people are asking that question but that she hasn’t reached a conclusion. “I think in some of the areas around protecting students and ensuring safe environments for them, there is a role to play ... I mean, when we had segregated schools and when we had a time when, you know, girls weren’t allowed to have the same kind of sports teams — I mean, there have been important inflection points for the federal government to get involved.” But are there any remaining issues like that where the federal government should intervene? “I can’t think of any now,” she replied.

Since her confirmation, DeVos has largely limited her media exposure to the cozy confines of the conservative press. Perhaps this interview explains why. After more than a week on the job, she’s still fumbling for coherent answers to basic questions.