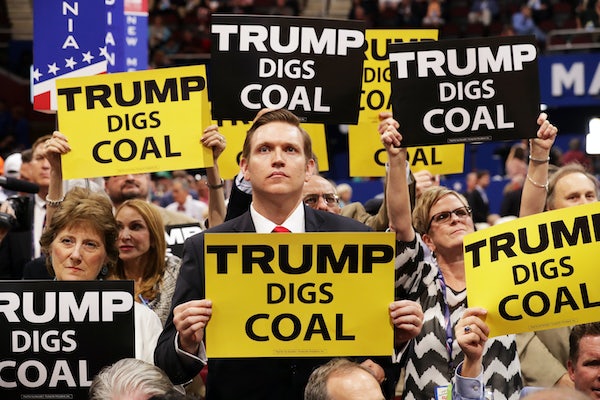 The Trump administration says it will improve air and water quality by cutting billions from the EPA.

The New York Times and Axios report that President Donald Trump is expected to announce “massive, transformational cuts” to the Environmental Protection Agency as soon as Monday. These cuts are widely expected to include the gutting of Obama-era regulations, including one that protects drinking water and another that fights climate change.

As the EPA’s new administrator Scott Pruitt tells it, these cuts are intended to bolster the agency’s core mission of protecting human health and the environment. “I really believe that at the end of eight years, we’re going to have better air quality, we’re going to have better water quality,” Pruitt said in a speech to the Conservative Political Action Conference on Saturday. That’s because Pruitt believes the environment will fare better if individual states control their own environmental rules. Pruitt also said the EPA in its current form has focused too much on climate change, and not clean air and water.

Fighting climate change does actually improve clean air, though. The Clean Power Plan—a primary target of Trump’s EPA cuts—aims to reduce carbon dioxide emissions from coal-fired power plants. That, in the short term, improves human health by reducing carbon dioxide clouds which contain particulate matter and other nasty stuff linked to asthma, heart attacks, and lung damage. And in the long term, it helps by preventing a warmer climate, which is expected to cause extreme heat and poor air quality, both of which increase the risk of illnesses and death.

Don’t expect the money saved from the EPA cuts to go toward other pollution-fighting programs, either. According to the Times, most of the money will be poured into the military, which happens to be one of the world’s biggest polluters.