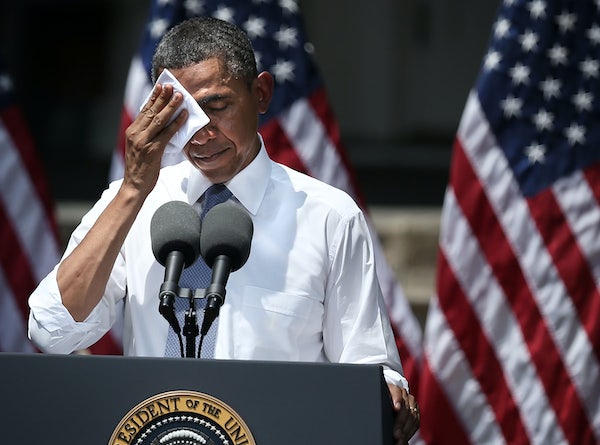 If President Donald Trump’s first month has taught us anything, it’s this: Take his promises seriously. Sure, he may have broken 34 campaign promises on his first day in office. But the biggest, most controversial ones—banning Muslims, increasing deportations, repealing Obamacare—are already becoming reality. And this week, he’s expected to tackle another hefty campaign pledge: tearing up Obama-era environmental regulations.

Trump took a few steps toward fulfilling that promise last week, repealing a rule that prevented coal companies from dumping mining waste into streams and confirming EPA antagonist Scott Pruitt to lead that very agency. Now, The Washington Post reports Trump is preparing executive orders intended to weaken two of Obama’s most aggressive and controversial environmental regulations: the Clean Power Plan, which was created to fight climate change, and the Waters of the United States (WOTUS) rule, which was created to protect 60 percent of America’s waterways from pollution. Trump will also lift a ban on mining coal on public lands.

The policies Trump is seeking to undo here are the centerpieces of former President Barack Obama’s environmental legacy. Along with the Paris Climate Agreement—which Trump also wants to do away with—the Clean Power Plan was the biggest thing a president has ever done to reduce carbon emissions. What’s more, it represented a national strategy to prioritize climate action and renewable energy development over the revitalization of the coal industry.

Unraveling Obama’s entire environmental legacy won’t be as simple as signing a few pieces of paper. Completely undoing and rewriting regulations takes time. There will be legal battles and protests. But Trump is sending a message that these are campaign promises he intends to keep. Environmentalists should believe him.