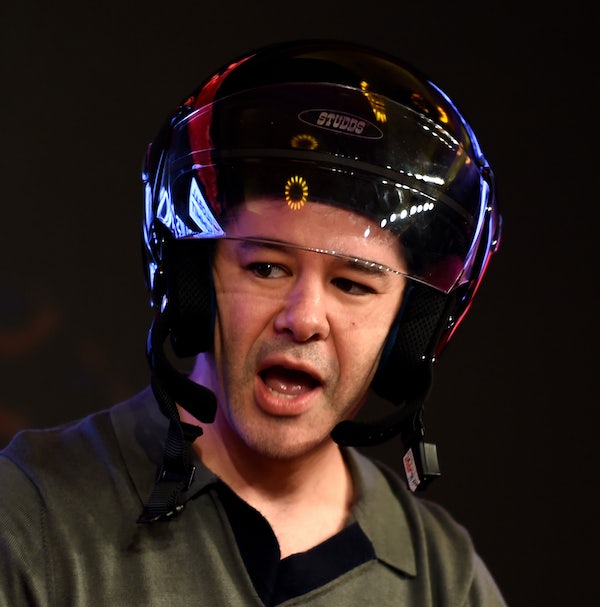 Uber’s Travis Kalanick wants to be a big boy, but it might be too late.

On Tuesday afternoon, Bloomberg published a dashboard video provided by Fawzi Kamel, an Uber driver, of him driving around Kalanick, the company’s CEO. Near the end of the video, Kamel and Kalanick get into an argument about how Uber has dropped the prices for the company’s luxury black car service, adversely affecting drivers like Kamel (emphasis mine).

Kamel: “You changed the whole business. You dropped the prices.”

Kalanick begins to lose his temper. “Bullshit,” he says.

Kalanick: “You know what?”

Kalanick: “Some people don’t like to take responsibility for their own shit. They blame everything in their life on somebody else. Good luck!”

That’s right—Kalanick, who has made billions of dollars as the head of the company Kamel works for, told his Uber driver that he wasn’t taking “responsibility” for his own losses. (Bloomberg reported that the fare for Uber Black has indeed fallen from $4.90 per mile to $3.75 per mile since 2012.)

Last night, Kalanick emailed his employees what he termed “a profound apology,” stating, “It’s clear this video is a reflection of me—and the criticism we’ve received is a stark reminder that I must fundamentally change as a leader and grow up. This is the first time I’ve been willing to admit that I need leadership help and I intend to get it.”

The apology might be too little, too late. Uber has been under fire recently for its perceived undermining of a taxi drivers’ strike against the Muslim ban and harrowing allegations of systemic sexual harassment within the company. Uber executive Amit Singhal was just fired after Recode discovered he had not disclosed to Uber the sexual harassment violation that had forced him to leave Google. Kalanick himself has also been criticized for being on Donald Trump’s business advisory council (from which he has since stepped down).

Uber might be going through PR hell right now, but it has always been a company that has exploited its drivers, most notably by classifying them as independent contractors. Kalanick’s outburst against Kamel is only the most visceral manifestation of the company’s ethos: prioritizing profit over people. It remains to be seen whether Kalanick will learn that lesson.