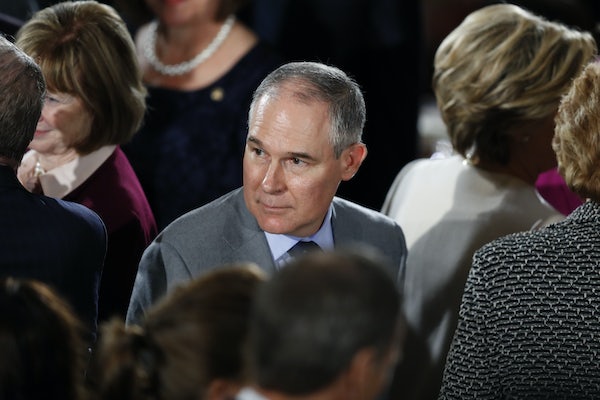 Scott Pruitt would like you to relax about the EPA cuts.

In the wake of news that President Donald Trump’s budget slashes the Environmental Protection Agency by 25 percent, the department’s new administrator called for calm and insisted he’s not totally on board with the administration’s plan. “Civility in our discourse is really, really important,” Pruitt, who is wrongly skeptical of man-made climate change and frequently sued the EPA as Oklahoma’s attorney general, said at a U.S. Conference of Mayors event in D.C. on Thursday. He implored those around him to “lean on these issues with some level of civility.”

Pruitt said he opposes some of Trump’s ideas for his agency—specifically Trump’s idea to cut a number of popular grant programs for states. Pruitt said he’d like to preserve Brownfields grants, which help states clean up and reuse highly polluted industrial sites. He also cited federal grant programs that rebuild aging drinking water infrastructure, like the $100 million EPA grant that Flint, Michigan, received last year to improve its corroded pipes. “I want you to know that with the White House and also with Congress, I am communicating a message that the Brownfields Program, the Superfund program, water infrastructure … are essential to protect,” Pruitt said.

Afterward, an EPA spokesperson declined to say if Pruitt opposed any other parts of Trump’s reported slash-and-burn budget for the EPA, such as eliminating the Office of Environmental Justice, reducing the workforce from 15,000 to about 12,000, and zeroing out funds for climate change initiatives and native Alaskan villages.