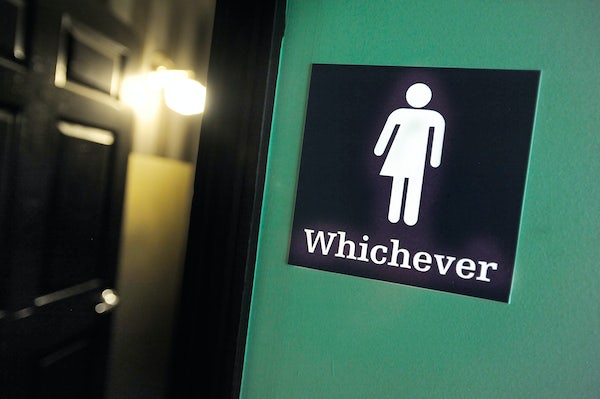 A frequent criticism of liberals, who are in introspection mode after last November’s elections, is that they are “obsessive on issues like gender identity,” as former British Prime Minister Tony Blair put it in his recent New York Times op-ed. Speaking to a former Hillary Clinton spokeswoman in late November, CNN’s Chris Cuomo said, “The criticism of your party is you’re talking about which bathroom to use, you know, more than what jobs people have in the middle class.” Then in January he raised the issue again, asking Bernie Sanders what he’d tell voters who see Democrats as “more concerned with what bathroom people go into [than] how they earn a living.”

Set aside the question of whether it would be craven and immoral for Democrats to tone down their advocacy for this oppressed group. Those tempted by the perception of political expediency should take a look at new polling out Friday from the Public Religion Research Institute. “A majority (53 percent) of Americans oppose laws that would require transgender people to use bathrooms that correspond to their sex at birth rather than their current gender identity,” according to the survey. That includes a “majority of independents (57 percent) and nearly two-thirds (65 percent) of Democrats.”

This polling suggesting that the bathroom issue is not a massive political problem for progressives. And it’s likely the numbers will move in an even more positive direction as more Americans become exposed transgender people, both in the culture at large and in their own lives. If anything, the PRRI survey is a reminder that social conservatives are out of step with most Americans on a host of issues.