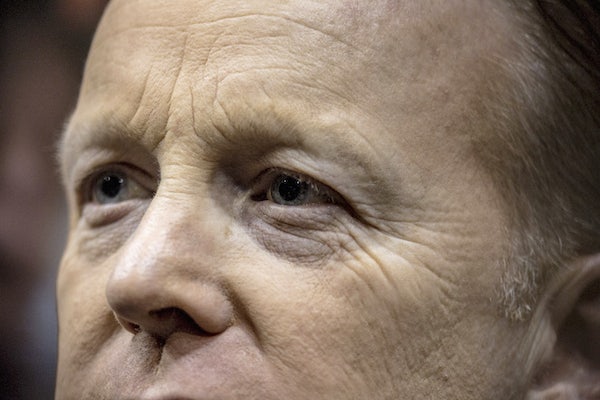 The Trump administration formally starts its own apology tour.

Speaking to Tucker Carlson on Wednesday, Donald Trump defended his insane “wiretapping” tweets by saying that they weren’t really about wiretapping—wiretapping was a metaphor, or something. “Wiretap covers a lot of different things,” Trump told Carlson, speaking about the topic for the first time since he made the claim that Barack Obama had ordered a tap on his phones. “I think you’re going to find some very interesting items coming to the forefront over the next two weeks.”

At Thursday’s press briefing White House Press Secretary/despised field trip chaperone Sean Spicer spent seven minutes reading news stories that seemed to fit the broad profile of “interesting things that aren’t about wiretapping but are sort of about wiretapping if you use ‘wiretapping’ as a broad stand-in for ‘surveillance.’” For the most part, these were hilarious own goals, as the stories Spicer read were mostly about the Trump campaign’s strange and close relationship with Russian intelligence. They were stories about why Trump would be surveilled, which by their nature did not make the president look particularly good—but Spicer serves a deranged audience of one, and that seems to have been what Trump wanted.

One of the stories Spicer read was by Fox News’s Andrew Napolitano—sorry, Judge Andrew Napolitano—who alleged that Obama used the U.K.’s Government Communications Headquarters to spy on Trump so it wouldn’t have “American fingerprints on it.” This understandably infuriated the U.K., America’s closest ally. “Recent allegations made by media commentator Judge Andrew Napolitano about GCHQ being asked to conduct ‘wiretapping’ against the then president-elect are nonsense,” read a statement released by GCHQ. “They are utterly ridiculous and should be ignored.”

And on Friday, the Telegraph reported that the United States—specifically National Security Adviser H.R. McMaster and Spicer himself—made a formal apology to the U.K.

Fifty-plus days in and the Trump administration still seems to not have realized that words have consequences. The wiretapping allegation, which has no basis anywhere outside of Trump’s paranoid mind, damaged the United States’s relationship with an ally for absolutely no reason. This won’t be the last formal apology that Sean Spicer, or that the Trump administration, makes to a friend.

Update: The Trump administration insists, to quote Mitt Romney, that there was no apology.