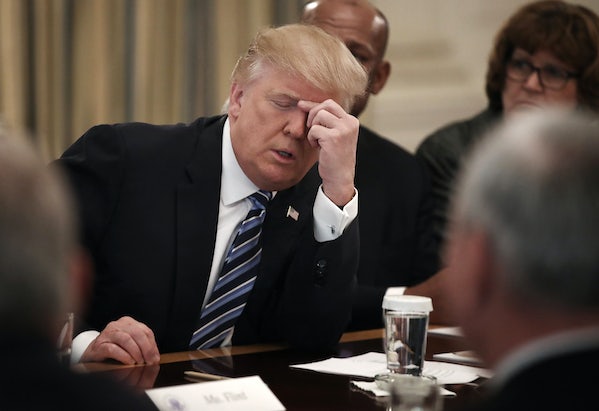 Donald Trump has no idea what to do next.

Immediately after House Republicans’ pitiful attempt at health care reform failed, the conventional wisdom—pushed by Trump himself—was that the White House was moving on, and fast. Trump talked about using budget reconciliation—a parliamentary maneuver that conveniently requires zero votes from Democrats—for tax reform, which, like Obamacare, has long been a goal of congressional Republicans and the special interests and superrich people who fund them.

But a few days later, it was reported that Trump was considering pushing tax reform and a huge infrastructure package simultaneously—perhaps to lure Democrats into some kind of Grand Bargain. Then it came out that Trump actually didn’t want to give up on health care reform just yet, and that Mike Pence had been dispatched to the Capitol to see if he could strike a deal with House Republicans. All this even though Mitch McConnell made it clear that he wasn’t interested in the Senate taking on Obamacare repeal after it bombed so spectacularly in the lower chamber.

Trump’s tenth week in office, in contrast to the feverish activity of his ninth, seems like a hangover week for everyone. Republicans are icing the bruises they got from repeatedly punching themselves in the face, and Democrats seem to have grown a bit tired of winning, as Trump, ironically, promised they would. On Thursday morning, Axios Presented By Alexander Strategy Group reported that Trump—whose inner circle consists of past business associates, old campaign hands, and his own family—wants to widen his net. “Friends who talk frequently to Trump,” wrote Mike Allen, “tell us the president will make one big change in response to the health-care fiasco: In the constant check-in phone calls for which he’s famous, he’s going to talk with a wider array of people—and include more Democrats.”

Democratic outreach has been pushed by Trump’s friend Chris Ruddy. Paul Ryan, meanwhile, is using it as a stick to keep Republicans in line: “What I worry about, Norah, is that if we don’t [pass a GOP health care bill], then [Trump will] just go work with Democrats to try and change Obamacare and that’s not—that’s hardly a conservative thing,” he told Norah O’Donnell of CBS News. “[I]f this Republican Congress allows the perfect to be the enemy of the good, I worry we’ll push the president into working with Democrats, he’s been suggesting that as much.”

Trump muddied the waters further on Thursday with a tweet castigating both his potential allies on the right and left.

Trump’s Democratic outreach might be in earnest or it might be a threat. But, like every other piece of Trump’s agenda, it is up in the air right now because Trump himself has no idea what policy to push or what coalition to form.