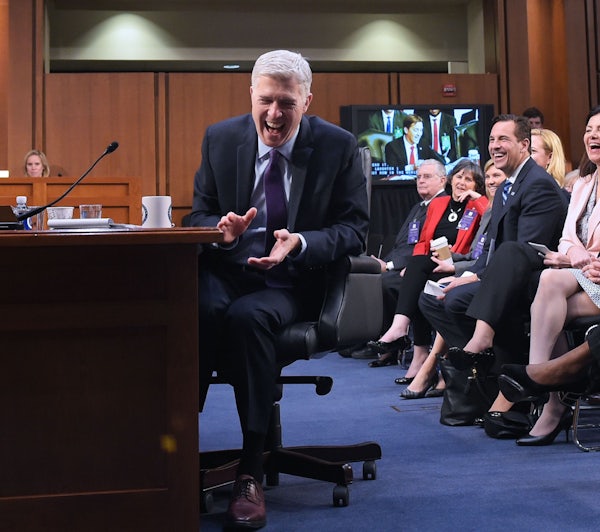 Can you imagine how conservative media would have responded if Merrick Garland was caught plagiarizing?

Neil Gorsuch has not had a particularly taxing Supreme Court confirmation process. This is in large part because he refuses to answer any questions about his judicial philosophy or the man who nominated him. (He could have shown up in a Hawaiian shirt and done nothing but sip margaritas and quote Jimmy Buffet lyrics and he wouldn’t have lost a single Republican vote.) Yes, there will be a Democratic filibuster, but even that sort of unprecedented step is not really about Gorsuch himself; instead, it’s rightfully being framed as payback for Senate Republicans’ absolutely unprecedented refusal to hold hearings for Obama nominee Merrick Garland.

But on Tuesday evening, Gorsuch’s nomination hit its biggest spot of turbulence yet, when it was reported that he had repeatedly plagiarized other authors in his book on euthanasia. According to Politico, “several passages from the tenth chapter of his 2006 book, The Future of Assisted Suicide and Euthanasia, read nearly verbatim to a 1984 article in the Indiana Law Journal. In several other instances in that book and an academic article published in 2000, Gorsuch borrowed from the ideas, quotes, and structures of scholarly and legal works without citing them.”

Gorsuch’s plagiarism seems to be limited to technical, medical language, and it happened decades ago. (The documents were also clearly provided by some sort of deep-pocketed anti-Trump group, though that’s neither here nor there.) And there is some dispute over the seriousness of the plagiarism. Syracuse University professor Rebecca Moore Howard told Politico that “each of the individual incidents constitutes a violation of academic ethics. I’ve never seen a college plagiarism code that this would not be in violation of.” But Gorsuch’s editor at Princeton University Press was dismissive, saying, “Judge Gorsuch did not attempt to steal other people’s intellectual property or pass off ideas or arguments taken from other writers as his own. In no case did he seek credit for insights or analysis that had been purloined. In short, not only is there no fire, there isn’t even any smoke.”

Still, these accusations reveal what a farce the Gorsuch hearings have been. Conservatives freaked out over Sonia Sotomayor’s “wise Latina” comment and forced her to apologize repeatedly, while also suggesting she was not smart enough to be a Supreme Court justice. Plagiarism is a much more serious issue, even if it has become less of a career-ender, thanks to people in Trump World and elsewhere being caught plagiarizing with zero repercussions. But it is being dismissed because Gorsuch’s credentials have been entirely irrelevant to his nomination process: Republicans only care that he is a grainy Xerox of Anton Scalia and Democrats only care that he isn’t Merrick Garland.