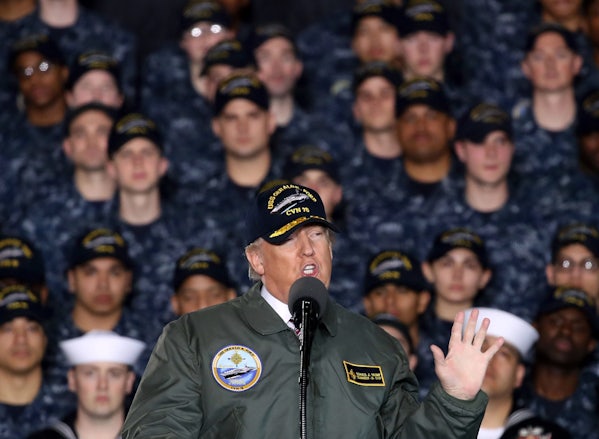 Donald Trump is a hawk now.

One of the longest-running debates about Trump has been over his foreign policy. On the one hand, Trump adopted the mantle of “America First” and could point to three decades of criticizing American interventionism—back in 1987 he ran a full-page ad in the New York Times criticizing American foreign policy for being too involved in other countries’ affairs. Throughout the campaign he argued that the U.S. should stay out of Syria. At the same time, however, he called for “taking the oil” from Iraq and Libya, and promised to “bomb the shit out of ISIS”—two planks that do not exactly fit in the isolationist playbook.

For the first 24 hours or so after it became clear that Bashar al-Assad has used sarin gas against his own people again, in violation of a 2013 U.S.- and Russian-brokered agreement to remove chemical weapons from Syria, Trump was very much an isolationist. His immediate response was to blame Barack Obama, continuing his tradition of blaming his predecessor for everything going wrong with the world. But that changed a day later, when he was allegedly moved by pictures showing dead Syrian children (there were also the usual reports that his privately compassionate but publicly craven daughter Ivanka also helped sway him). Bombing Syria gave Trump one of the few days of good press of his presidency—pundits signaled to Trump that they will like him and treat him seriously if he bombs other countries.

To talk about a “Trump Doctrine” is absurd and his foreign policy, like everything else, seems to be a product of his whims. In Syria, in particular, there seems to be no strategy at all. As the Times reported on Tuesday, “As various officials have described it, the United States will intervene only when chemical weapons are used—or any time innocents are killed. It will push for the ouster of President Bashar al-Assad of Syria—or pursue that only after defeating the Islamic State. America’s national interest in Syria is to fight terrorism. Or to ease the humanitarian crisis there. Or to restore stability.”

Trump is carrot-and-sticking with China here—dangling a trade deal in front of them on the condition that they rein in Kim Jong-un, while telling them that the United States is prepared to act unilaterally to fix a decades-old conflict on the Korean peninsula. Trump is a bluffer (as far as I can tell, it’s the only negotiation technique he uses consistently). But this is notable, coming as it does after the intervention in Syria. Seventy-five days into his administration, Trump has decided he can change the world.