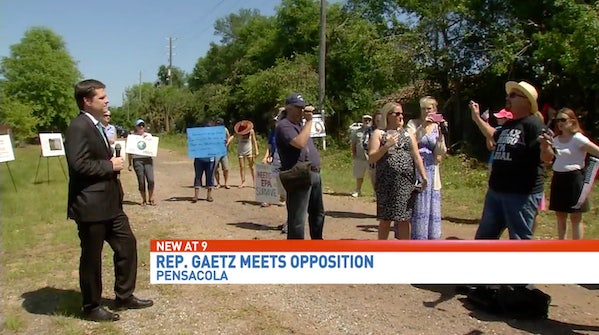 This is the dumbest town hall a Republican congressman has ever done.

GOP members of Congress have had a rough go of it since Donald Trump became president. Faced with swarms of angry constituents, some lawmakers have limited the number of people who can attend, banned posters, and snuck out the back door to avoid confrontation. Some are just straight-up skipping events altogether.

Freshman Representative Matt Gaetz of Florida has had a few unruly town halls of his own, thanks to his support of a bill to completely eliminate the Environmental Protection Agency. But that hasn’t deterred him. On Thursday, he held a town hall on the grounds of a contaminated Superfund site in Pensacola, for the purpose of arguing that the EPA is not necessary.

The American Creosote Works Superfund Site was once a wood-treating facility, which for 80 years seeped chemicals into the soil and groundwater. The EPA designated it a Superfund in 1983, and the site still hasn’t been completely cleaned up. Gaetz’s logic is that this is all the EPA’s fault, claiming that “if the money that goes to the EPA instead went to the states, Florida would have done the job by now,” ABC affiliate WEAR reported.

There’s no evidence that the pace of the cleanup is due to EPA incompetence. The Superfund program is supposed to compel the polluters themselves to clean up the messes they made, but American Creosote Works went bankrupt in 1981. That means cleanup has to come solely from federal funds, and the Superfund program has been underfunded for years, unable to keep up with all of the pollution from companies that have folded. Trump’s proposed budget would shrink the Superfund program even more, cutting $330 million from its $1.1 billion budget.