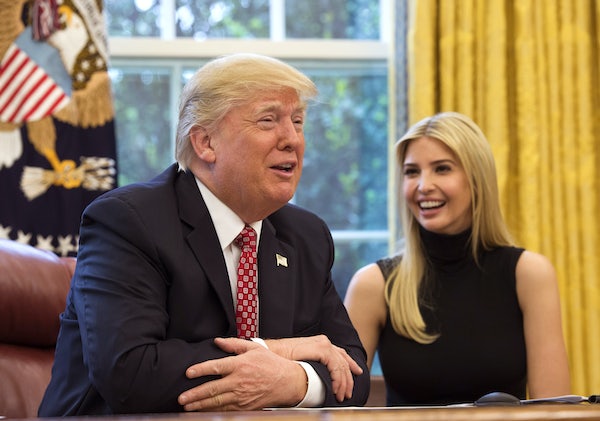 The Trump “100 Days” website is a hilariously typical own goal.

Two contradictory things are simultaneously true about Trump’s first 100 days. The consequences of Trump’s first 100 days, as my colleague Jeet Heer wrote on Tuesday, will be profound and destructive. He has already done lasting damage to the country and its standing in the world. But at the same time, Trump has also accomplished rather little, blundering from issue to issue in search of points to put on the board.

Trump has claimed that 100 days is an arbitrary barometer, declaring it a “ridiculous standard” and “not very meaningful.” But, while there is a certain amount of truth in this, Trump’s own words and actions betray that he cares a whole lot about the 100-day marker. In fact, the administration has been on a mad dash for the last two weeks to try to find something to get done.

First, it returned to health care for (roughly) the 87th time since the American Health Care Act crashed and burned a month ago. It didn’t work. Then it tried to blow up budget negotiations by demanding that Congress allocate funds to pay for The Wall. That hasn’t worked either. With four days left until the 100th day, the administration has only three plays left: lie, obfuscate, and exaggerate.

The Trump White House unveiled its “100 Days” site on Tuesday, which asserts, “In his first 100 days, President Donald J. Trump has taken bold action to restore prosperity, keep Americans safe and secure, and hold government accountable.” The problem, however, is that the website is thin on details that back these arguments up. Some of the claims—like 500,000 new jobs—arguably are not the result of Trump’s policies, but Obama’s. There’s a lot of talk about executive actions, but only a handful of these have actually done anything. The site boasts about Trump’s military action in Syria, but it has become increasingly clear that the strike was not part of a larger strategy for ending the civil war.

One of the accomplishments in the “Keeping Americans Safe & Strengthening Security Abroad” section is “advocated increasing military spending by $54 billion,” which is not an accomplishment at all. Only one item in the “Making Government Accountable to the People” section is about government accountability—the five-year ban on administration officials engaging in lobbying. The rest—most notably Trump’s only real accomplishment, the successful nomination of Neil Gorsuch to the Supreme Court—are a grab bag of seemingly random actions.

Even more damning is another site: The Donald J. Trump Contract With The American Voter, a list of 100-day promises that the Trump campaign unveiled on October 22, 2016. To be fair, this was a desperate push from a campaign that was all but screwed. The Access Hollywood tape had effectively submarined Trump’s candidacy and James Comey wouldn’t emerge to save his skin for another six days. But that doesn’t change the fact that Trump has fulfilled very few of the promises on this  “contract” with the American people—and doesn’t seem close to fulfilling them in his first year, either. In fact, he’s zero for ten on the list of legislative promises.