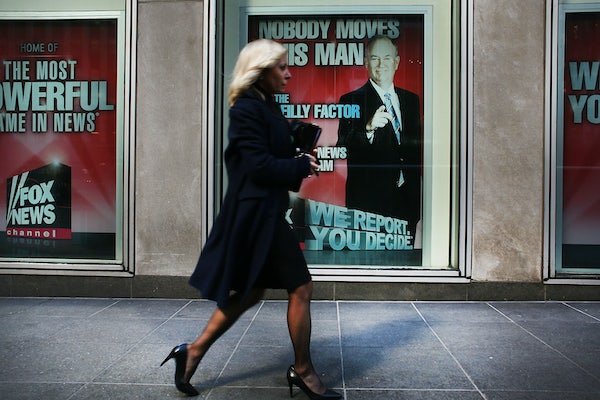 New York reporter and bane of Fox News Gabriel Sherman is reporting that Bill Shine, who replaced Roger Ailes in the fall as the network’s president, is out. Shine was Ailes’s right-hand man for years, and it is believed he played a significant role in perpetuating Fox News’s misogynistic corporate culture. There have been numerous reports of Shine covering up a long history of sexual harassment by Ailes and Bill O’Reilly. Late last week The Hollywood Reporter reported that “pressure is building” for Fox to replace Shine, and that many people in the company see “Shine as complicit in the sins of the past.” Shine has also been named in multiple sexual harassment lawsuits against the network.

Shine’s exit is the latest seismic shock in months of earthquakes at Fox News. Ailes exited the company in July. Greta Van Susteren left in September, allegedly because of the “culture” built by Ailes at the copmany. The election of Donald Trump—an event that reportedly “turned off and horrified” Rupert Murdoch’s son James—was another shock. Megyn Kelly left the network in January, partly due to O’Reilly’s response to sexual harassment allegations. And O’Reilly was fired last month after it was reported that Fox News had paid millions of dollars to women who had accused him of sexual harassment.

Fox News is still a giant of right-wing television. Its ratings have not been hit and Tucker Carlson has done well (at least as far as viewership is concerned) in O’Reilly’s slot. But of the network’s bench of stars, Sean Hannity is the last man standing. And Suzanne Scott, who is set to replace Shine, was also reportedly complicit in the company’s anti-women culture. According to Sherman, she was “in charge of enforcing Ailes mini-skirt dress code for women,” and Scott was named with Shine in Julie Roginsky’s lawsuit against Fox News.

In many ways, Fox News’s existential crisis is just beginning.