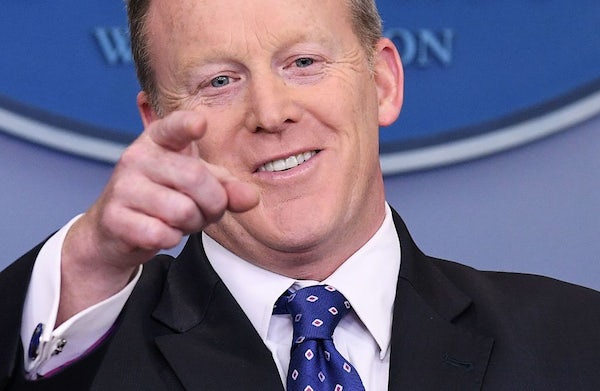 Why won’t the White House say whether or not it’s secretly recording conversations?

Sean Spicer was back from vacation, where he somehow got both pinker and oranger. After a briefing from National Security Advisor H.R. McMaster and a lengthy statement from Spicer about beef*, the press secretary was asked a number of questions about a tweet sent by President Trump this morning, in which Trump seemingly threatened former FBI Director James Comey and implied that he was secretly recording conversations held in the White House.

This is a very troubling, but also entirely in character response from the Trump White House, which has historically refused to elaborate on or contextualize the president’s most explosive claims, most notably that President Obama ordered that Trump Tower be “wiretapped.” As with the “wiretapping” claim, the real issue seems to be that Trump surrogates are placed in an impossible position: If they say that the president was mistaken, they’re in big trouble, but backing up these outlandish claims would only make things worse, and destroy whatever little credibility they have left. (To note: Spicer doesn’t have this problem.) Of course, saying nothing, as Spicer does here, only makes things worse for Trump, who will ultimately be embarrassed in a high profile situation, which is exactly what happened with the Trump Tower claim. That, in turn, leads Trump to overreact—Comey’s decision to matter-of-factly state that the FBI had no information that suggested that Trump’s tweets about “wiretapping” were correct most likely led to his ouster. (It’s possible, as my colleague Jeet Heer pointed out on Twitter earlier, that Trump was actually connecting his “wiretapping” tweets to Comey in his threat.)

Things are already getting worse for Trump. Democrats called Trump’s bluff this afternoon:

*The Obama administration is largely responsible for the beef stuff.