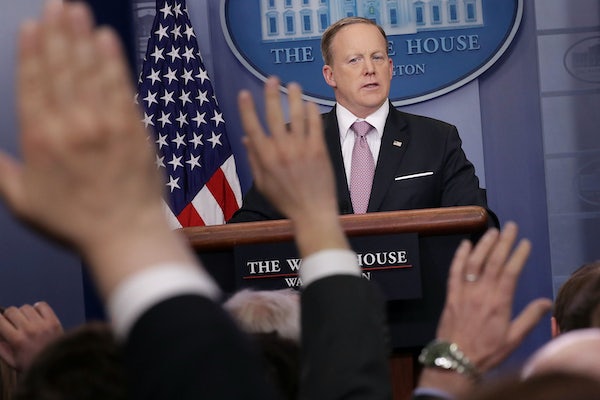 During the same unhinged Friday morning tweetstorm in which President Donald Trump basically threatened to blackmail former FBI Director James Comey, the president stressed that his beleaguered White House communications team can’t help being inaccurate some of the time.

Canceling briefings would be an outrageous affront to the press’ role in American democracy, and it’s shameful that Press Secretary Sean Spicer on Friday wouldn’t walk back Trump’s suggestion. But in Spicer’s defense, Trump is the one responsible for the White House’s communications crisis this week, as he’s been contradicting his staff’s on-the-record statements.

Josh Earnest, a White House press secretary under President Barack Obama, noted on MSNBC on Friday that it isn’t Spicer’s fault that Trump doesn’t give him complete and accurate information to relay. Earnest also pointed out that it’s hard for a White House to keep its story straight when the president won’t tell the truth.

Besides, how can Trump expect his team to do their jobs if he doesn’t even talk with them before briefings?

None of this excuses how bad Spicer is at his job. (There’s a reason his deputy, Sarah Huckabee Sanders, got relatively good press filling in for him this week.) Though they failed to spin this disaster of a week, their boss was ultimately to blame.