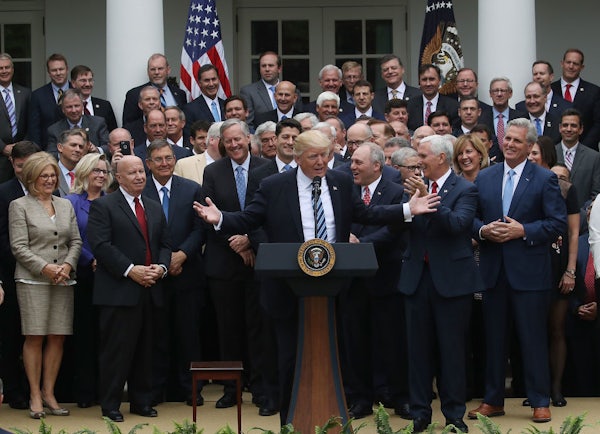 It’s possible that Trump won’t get any major legislation passed before 2018.

With the 100-day marker in the rearview mirror, the Trump administration has largely stopped pushing one of its most aggressive lies—that this is the most active administration in the history of the country. There has been the appearance of activity, to be sure (mostly in the form of executive orders), but thus far this administration has favored symbolic action over the difficult work of meaningful action.

It has had very little success where it matters most: Congress. The American Health Care Act passed the House, yes—and was given a Super Bowl champion-esque reception in the Rose Garden—but the Senate has shown no sign that it is going to produce its version of the bill any time soon. And while the Trump administration has been itchy for a legislative “win,” that’s not happening any time soon either.

Axios Presented By Silver Shamrock Novelties reported on Wednesday that, “Republican leaders are coming to the bleak conclusion they will end summer and begin the fall with ZERO significant legislative accomplishments. Privately, they realize it’s political malpractice to blow at least the the first nine of months of all Republican rule, but also realize there’s little they can do to avoid the dismal outcome.” Axios also reported that Republican leaders think the road ahead is more difficult than the road behind—that the next four months will be “MORE troublesome than the first four.”

Republicans in Congress have probably already missed their best window for the kind of bold, sweeping, draconian change they’ve been promising for years. Trump set what little political capital he had on fire as soon as he was inaugurated. Their only argument for passing health care is that it’s Sophie’s Choice—they can either face the wrath of their rabid base, which will be furious if they fail to act, or the wrath of the rest of the country, which detests the policies they’re trying to administer.

Worse, their window for passing anything in the first two years is closing fast. If they can’t get anything done before the fall, they’ll have to rush an ambitious agenda through in September. Even that may be too late—with the midterms fast approaching, antsy House members will be harder to wrangle.