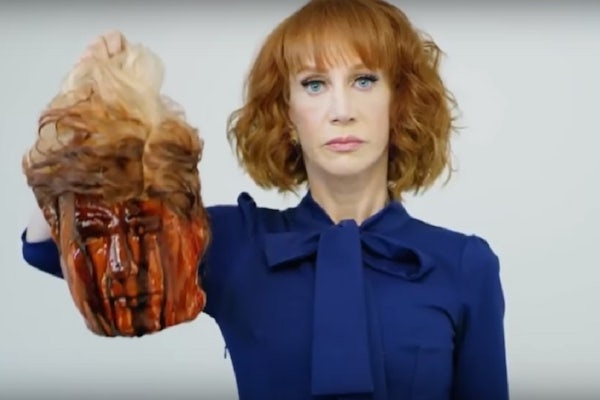 A tip for Kathy Griffin: If you give Donald Trump an inch, he’ll take a mile.

Few things have brought the country together in agreement as quickly as Griffin’s dumb and bad photo shoot in which she beheaded Trump ISIS-style and held up his bloody head to the camera. It’s so obviously terrible—saying it’s in “bad taste” is an understatement—that it was condemned by pretty much everyone, from Chelsea Clinton to Griffin pal Anderson Cooper. There are still lines that can’t be crossed, and one of those lines is joking about decapitating the president. This kind of ostentatious ploy for attention is only worse when you remember that people on the left spent the last decade defending Barack Obama from all kinds of heinous threats.

Given how badly things have been going for Trump—his foreign trip, hailed by the administration as the highlight of his presidency thus far, was quite possibly a historic disaster—his allies in both politics and the media have seized the incident and run with it. Nearly 24 hours later, a photo of Griffin holding Trump’s head is still leading the Drudge Report. There are currently ten links to Griffin-related content on the home page of Breitbart alone, including one to a story titled, “Kathy Griffin ‘Beheading’: Hollywood’s Feminist A-List Cashes In on Global Suffering of People of Color.”

Trump himself, who rarely wastes an opportunity to score cheap political points about how Democrats are evil, seized the moment on Wednesday morning.

The idea that Trump’s adult children “are having a hard time with this” is a little weird, which helps explain why young Barron gets thrown out there to represent how unsettled the family is. Trump, who spent months shouting that his opponent should be put in jail, who cited “extremely credible sources” to claim that Barack Obama wasn’t born in America, who posted unflattering photographs of Ted Cruz’s wife and threatened to “spill the beans” on her, who encouraged supporters to beat up protesters, who attacked Megyn Kelly’s menstrual cycle, and who bragged about grabbing women by their genitlia, has absolutely no credibility when it comes to civility, whether online or off.

Still, he’s not wrong. Trump’s presidency has been so terrible and degrading that, at times, there’s a sense that anything goes. But resisting Trump requires a degree of discipline. Right-wing media is so eager to run with Griffin’s dumb stunt because it can be used to paint the entire resistance. If there’s one lesson from this mess it’s “don’t do a photo shoot in which you hold up a fake severed Trump head.” But if there’s a broader lesson it’s that Obama’s “don’t do dumb shit” rule is a good one for anyone looking to discredit Trump.