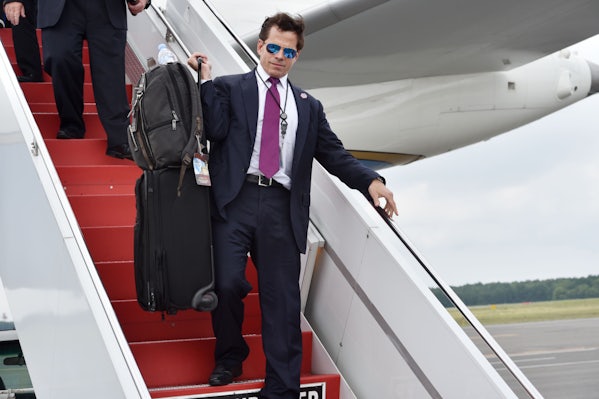 Turns out the Mooch front-stabbed himself.

Only eleven days after it was announced that he was getting the job, The New York Times reported on Monday that America’s Number One Mooch has been booted from his position as communications director. Apparently, John Kelly, Trump’s new chief of staff, pushed my man Tony out the door before his job had even officially commenced.

But what an unforgettable eleven days it has been. At first, it looked like the Mooch was shooting straight to the top of the totem pole, pelvis-first. He had finally been hired after months of being, in his words, “cock-blocked” by Reince Priebus. He supposedly answered directly to Trump himself. Sean Spicer resigned in a huff over Scaramucci’s hiring, which was most likely a convenient excuse after being picked on by his boss for six months straight.

Almost immediately, the Mooch declared an all-out war against Priebus, who he believed was leaking damaging information to the press. This culminated in the forever infamous conversation with The New Yorker’s Ryan Lizza that forced even the stodgiest publications to publish the lines “I’m not trying to suck my own cock” and “Reince is a fucking paranoid schizophrenic, a paranoiac.” But the next day, it was Priebus who was unceremoniously booted from the White House: The Mooch, it seemed, was an unstoppable force.

Not so fast! Later on Friday, the Mooch got some bad news—his wife was leaving him. He had also missed the birth of his second son while fighting for his president. Oh, and he sold his company so he could join Trump’s team.

But Trump, that paragon of decorum and decency we have come to know and love, apparently could not handle the Mooch:

Many people in Trump’s orbit have flown too close to the sun, but none so gloriously as Anthony Scaramucci. RIP the Mooch. (Full disclosure: I would still bang the Mooch.)