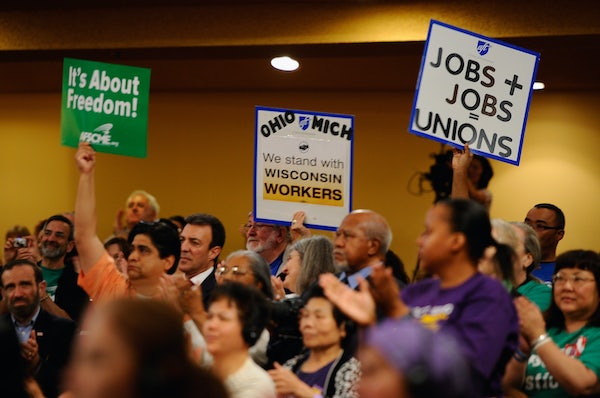 The Supreme Court will get another chance to wreck unions.

The nation’s highest court will hear Janus v. AFSCME, which challenges the collection of mandatory fees for public sector workers. It’s the second case of its type; another, Freidrichs v. California Teachers Association, resulted in a 4-4 deadlock after the death of Antonin Scalia. In both cases, plaintiffs argue that the mandatory fees violate their First Amendment rights by obligating them to support the union’s political work. But unions, as Bloomberg BNA reports, argue that non-union public workers still benefit from collective bargaining:

Unions point out that they are legally obligated to represent every worker in a collective bargaining unit, including nonmembers. Labor organizations are also restricted from spending nonmembers’ money on activities unrelated to bargaining, like political advocacy.

A ban on the fees would be a significant financial blow to public sector unions. It would also follow moves by 28 states to bar private sector unions from forcing nonmembers in a collective bargaining unit to similarly chip in on administrative costs.

The Janus plaintiffs are represented by the National Right to Work Foundation. The Center for Media and Democracy reported in 2014 that the group, which is the legal arm of the National Right to Work Committee, has been funded by the Koch brothers’ Freedom Partners group, the Charles G. Koch Charitable Foundation, DonorsTrust, and Donor Capital Fund. It’s been trying to get a case like Janus before the Supreme Court for years, and if the court rules in their favor—with Neil Gorsuch on the Court this is a likely possibility—it’ll strike a blow to unionization and effectively transform portions of the public sector into right-to-work territory. Non-union members would become “free riders,” benefiting from union work without paying for it; meanwhile, unions may find themselves unable to fund themselves. Janus is about weakening union power, as was Friedrichs.

That will harm the case’s plaintiffs, though they may not realize it now. A 2016 report from the Economic Policy Institute stated that the decline of unions correlates to lower pay for private sector workers. “At least for middle-wage men, the impact of the erosion of unions on the wages of both union and nonunion workers is likely the largest single factor underlying wage stagnation and wage inequality,” researchers wrote. Freedom from fees will save them money in the short term, but the long-term consequences will shrink their bank accounts and benefit the very corporate interests bankrolling their case.