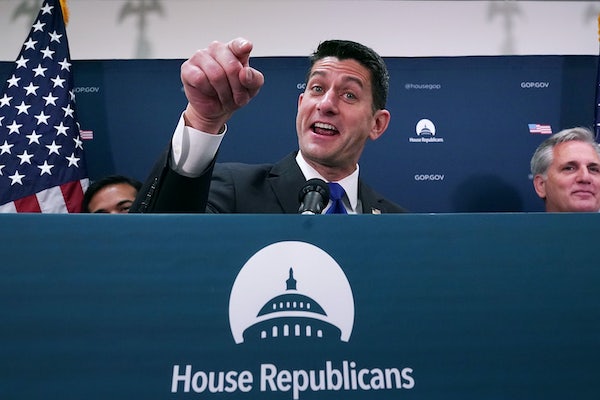 The GOP’s tax reform push is already in bad shape.

On Thursday, House Republicans passed a blueprint budget, a first step to the ultimate goal of passing a massive tax cut for the rich. Donald Trump, who has clearly not learned anything from the touchdown dance he performed in the Rose Garden in May after the House passed an Obamacare repeal bill, was jubilant:

Passing a budget resolution is crucial, but it’s also probably the easiest step in a process that will involve many very difficult steps. And still the House only narrowly passed the resolution, with 20 Republicans voting against the measure.

The GOP dissenters largely came from New York and New Jersey, two states that would be significantly affected by the elimination of state and local tax deductions, which is expected to be part of any tax reform bill taken up by Congress. Republicans right now are planning on paying for tax cuts by eliminating deductions and loopholes, but have so far largely been short on specifics. But as the dissent from New York and New Jersey shows, these moves will likely lead to blowback in both the House and Senate.

That tax reform is already experiencing some turbulence is a sign of things to come. New dissenters could emerge, like the ultra-conservative Freedom Caucus, which killed Obamacare repeal earlier this year. In the Senate, Republicans are already making noise about tax reform’s potential to add to the deficit and hurt the middle class. The Senate’s arcane rules will require numerous backbends; there is now an expectation that “regular order” will be followed, meaning there should be some debate, which will likely only make the bill more unpopular with the public.