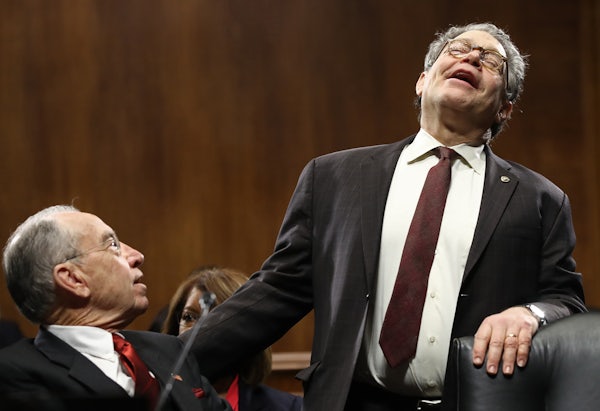 A former Democratic aide has accused Franken of trying to forcibly kiss her. The allegations, reported in Politico on Wednesday morning, are the latest additions to a mounting pile of evidence that the senator has a disturbing history with women:

“He was between me and the door and he was coming at me to kiss me. It was very quick and I think my brain had to work really hard to be like ‘Wait, what is happening?’ But I knew whatever was happening was not right and I ducked,” the aide said in an interview. “I was really startled by it and I just sort of booked it towards the door and he said, ‘It’s my right as an entertainer.’”

All of this sounds very familiar, based on past reporting of Franken groping and forcibly kissing women. The latest alleged incident occurred before Franken entered the Senate, and in a statement he said the story is “categorically not true.” But two sources independently confirmed to Politico that the woman told them about her experience at the time.

As I wrote weeks ago, Franken should resign. It will only get worse the longer he stays. His ongoing refusal to relinquish a safe Democratic seat to someone who has not repeatedly harassed women should disturb everyone in his party.