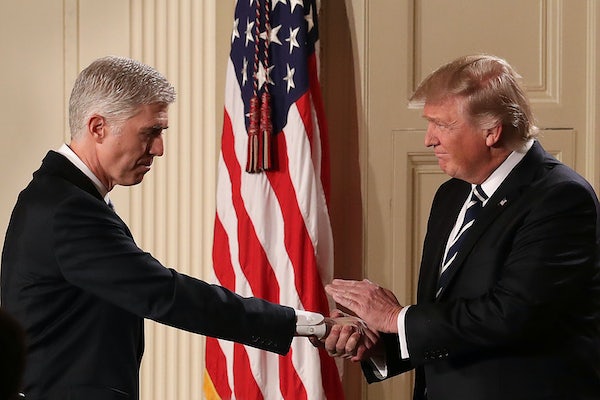 Neil Gorsuch was not servile enough for Donald Trump.

The appointment of Gorsuch will go down as one of the president’s lasting legacies, since the Supreme Court justice is likely to be shaping law for decades to come. Trump himself often touts the appointment as a reminder to his Republican base of what he’s done for them. But in the weeks before Gorsuch’s confirmation, Trump reportedly had second thoughts about his choice, believing Gorsuch was insufficiently grateful for the president’s patronage.

[E]arlier this year, Trump talked about rescinding Gorsuch’s nomination, venting angrily to advisers after his Supreme Court pick was critical of the president’s escalating attacks on the federal judiciary in private meetings with legislators.

Trump, according to several people with knowledge of the discussions, was upset that Gorsuch had pointedly distanced himself from the president in a private February meeting with Sen. Richard Blumenthal (D-Conn.), telling the senator he found Trump’s repeated attacks on the federal judiciary “disheartening” and “demoralizing.”

The president worried that Gorsuch would not be “loyal,” one of the people said, and told aides that he was tempted to pull Gorsuch’s nomination — and that he knew plenty of other judges who would want the job.

As the Post notes, Trump’s frustration was compounded by a delay in receiving a groveling letter Gorsuch had written to him, which read in part, “Your address to Congress was magnificent.” Once aides showed it to Trump, he was assuaged.