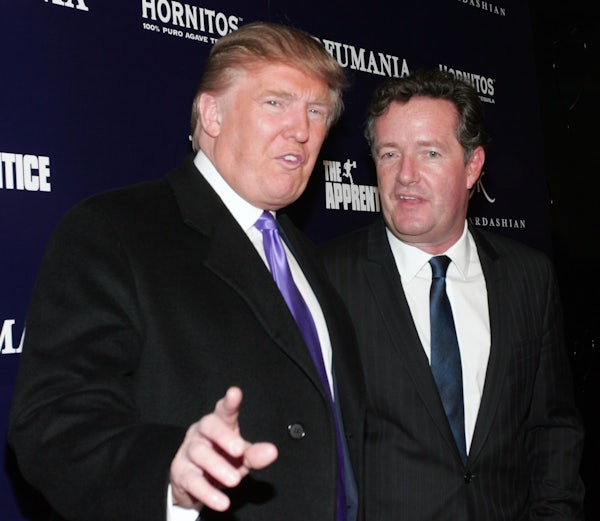 Trump’s climate-change answer was all kinds of wrong.

It literally could not have been more incorrect. First off, “Do you believe in climate change?” is a bad question that should be banned from all interviews. But fine, that’s the question Piers Morgan chose to ask Donald Trump for his first internationally broadcast interview, which aired over the weekend. Trump’s response was littered with factual inaccuracies that Morgan failed to correct.

Here is the transcript:

TRUMP: There is a cooling, and there is a heating, and I mean, look—it used to not be climate change. It used to be global warming, right?

TRUMP: That wasn’t working too well, because it was getting too cold all over the place. The ice caps were going to melt, they were going to be gone by now, but now they’re setting records, so OK, they’re at a record level. There were so many things happening, Piers. I’ll tell you what I believe in. I believe in clear air. I believe in crystal-clear, beautiful water. I believe in just having good cleanliness in all.

Let’s break down how wrong this is, sentence-by-sentence.

That’s untrue. While there are average global temperature fluctuations every year, there is a clear warming trend over the long-term, starting when humans began pumping large amounts of greenhouse gases into the atmosphere during the industrial revolution. Here is the most recent global temperature data released by NASA, a federal agency that Trump is technically in charge of.

Trump is using a common argument here: that scientists changed the term “global warming” to “climate change” because they couldn’t support their claim that the world was warming. That’s also incorrect, and again, Trump could see that if he looked at information from his own scientific agencies. As NASA explains, climate scientists have used both “global warming” and “climate change” to describe different things since at least 1975.

In sum, Trump is bad at science, Morgan is bad at journalism, and everyone is dumber for having listened to both of them.