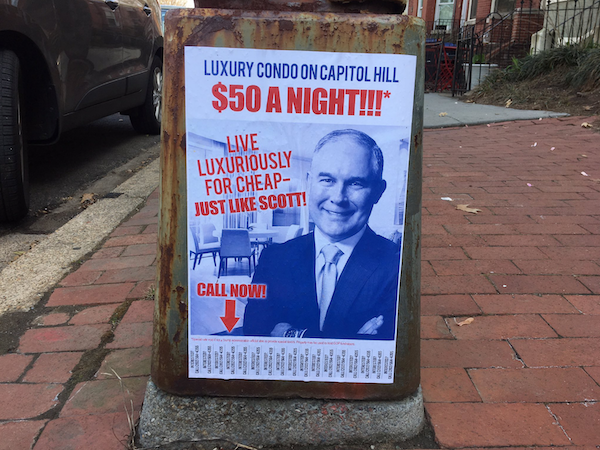 The lobbyist who rented a room to Scott Pruitt may have broken condo bylaws—and D.C. law.

The Environmental Protection Agency chief’s cheap rental agreement with a top energy lobbyist’s wife may not have been only unethical, but illegal. On Friday, NBC 4 Washington reported that the owners of the building where Pruitt rented a room last year “didn’t have a basic business license to operate a single-family rental.”

NBC noted that three “units inside the building” belong to a corporation co-owned by Pruitt’s former landlord, healthcare lobbyist Vicki Hart. But the building itself, owned by 223 C Street LLC, is connected to Hart as well. The LLC’s registration lists the same address as her business, Hart Health Strategies.

In other words, it appears Hart violated District of Columbia law in renting Pruitt a $50/night room in her condominium—an arrangement Fox News Radio’s John Decker called a “sweetheart deal.” Hart’s husband, J. Steven Hart, is a native Oklahoman like Pruitt and the chairman of a powerful firm that lobbies the EPA. Steven’s name was originally listed on Pruitt’s lease, but was scribbled out and Vicki’s name was written in.

Hart may have also violated her condominium association’s bylaws to rent to Pruitt. The bylaws—a copy of which was provided to me by Documented director Nick Surgey—state that condo owners are not allowed to rent out single rooms to non-permanent tenants: “no portion of a Unit (other than the entire Unit) may be rented, and no transient tenants may be accommodated therein.”

It’s unclear whether these bylaws, written in 1980, are up to date. The condo association’s website does not provide names or contact information for members of the board. Neither Vicki Hart nor the EPA returned a request for comment.