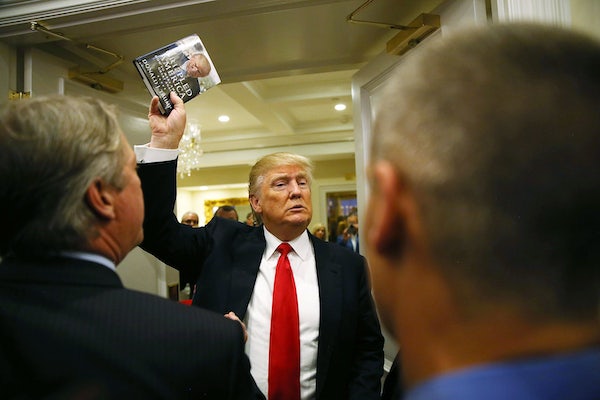 Trump does not read books. He claimed during the 2016 election that The Art of the Deal (which he did not write) was his favorite book and that All Quiet on the Western Front (often assigned in high school) was second. But he then told Megan Kelly that he doesn’t have time for anything longer than 280 characters. “I read passages, I read areas, chapters, I don’t have the time,” Trump said. “When was the last time I watched a baseball game? I’m watching you all the time.”

There’s little reason to think that’s changed since assuming office, although the president does seem to have gotten through the first page of Jon Meacham’s Andrew Jackson biography, leading to a bizarre tweet about Jackson and the Civil War. But that hasn’t stopped Trump from tweeting frequently about books—as long as they’re about him or his administration, or by close allies.

Since taking office, he’s tweeted about such titles as Corey Lewandowski and David Bossie’s Let Trump Be Trump; The Capitalist Comeback by Andy Puzder (who withdrew his nomination to be Trump’s Secretary of Labor); The Art of the Donald: Lessons from America’s Philosopher-in-Chief by Daily Caller News Foundation chief Christopher Bedford; The Faith of Donald J. Trump: A Spiritual Biography by David Brody; and Box of Butterflies by Roma Downey (who is the wife of Apprentice producer Mark Burnett, who has refused to give up tapes rumored to contain racist comments from the president).

The latest book to join the unofficial Trump Book Club was Sean Spicer’s The Briefing:

These tweets inevitably create sales bumps, but not huge ones. A few of the books that Trump has tweeted about have become New York Times bestsellers—but several have been less successful. (Let Trump Be Trump, for instance, is the most successful book the president has tweeted about in the past seven months. It debuted at #3 on the Nonfiction list before dropping off a few weeks later.)  Spicer’s book jumped, as CNN’s Brian Stelter noted, to about 2,000 on Amazon:

The numbers in Karni’s tweet aren’t reliable—novelrank.com does not have accurate sales data. But there’s no reason to suggest that Trump sold more than a couple hundred copies of Spicer’s book, given its sales ranking peak of 2,000 (and that’s a fairly generous estimate). This kind of bump, based on past examinations of the Trump Effect, seems typical for the president.

But there is one area where Trump is great at selling books. Consider the cases of Fire and Fury by Michael Wolff and A Higher Loyalty by James Comey. Trump attempted to trash both books—highly unflattering portraits of his administration—on Twitter. So far they are the year’s two best-selling titles, each with over a million copies to their credit.