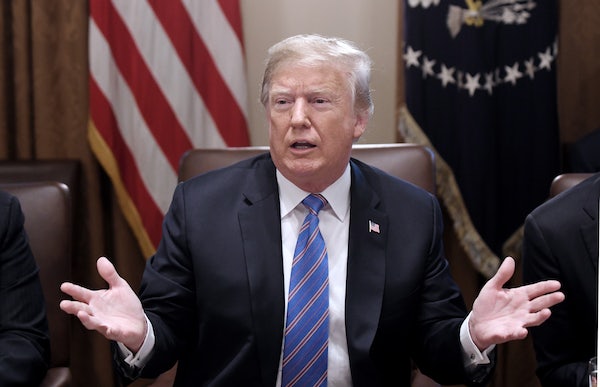 Trump misses the point about the European Union’s record fine against Google.

On Wednesday, the European Union brought a $5 billion (€4.3 billion) fine against Google for its abuse of its Android mobile operating system. The fine was the result of an investigation into anticompetitive practices that began eight years ago and that led to an earlier $2.7 billion fine relating to its online shopping platform.

But the new fine comes amid an escalating trade war between the United States and the European Union. While the EU fine has nothing to do with the tariffs on steel and cars that have been levied, the president is nevertheless arguing that it is part of the nascent trade war—and proof that the EU has taken advantage of the U.S. for years.

While Trump has been critical of Amazon and Apple, other tech giants like Google and Facebook have escaped his ire. That may be because he is not exactly a technophile: Amazon’s online shopping platform and Apple’s hardware production are less abstract than a search engine and a social network. Politics certainly plays a role as well—Amazon has undoubtedly been singled out because it shares an owner, Jeff Bezos, with The Washington Post, which the president has repeatedly feuded with.

But Trump’s embrace of Google doesn’t really have anything to do with Google. The president is looking for any evidence he can to show that the EU is abusing American companies. The most recent fine isn’t that—it’s part of a decades-long regulatory push. But at this point Trump doesn’t have much evidence that European companies are taking advantage of American ones, so he’ll take what he can get.