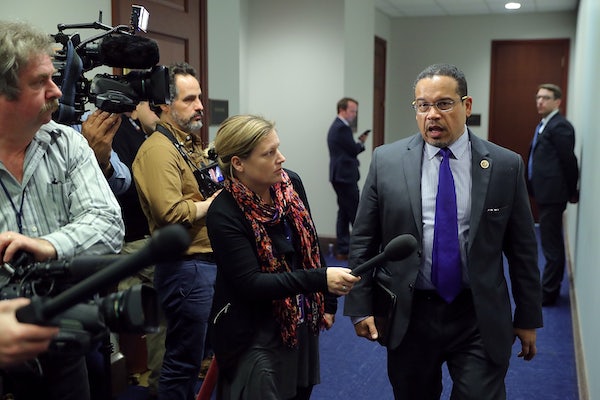 The six-term congressman, who is competing Tuesday for the Democratic-Farmer-Labor Party nomination for Minnesota attorney general, was accused of domestic violence in a Facebook post on Saturday. The post was written by Austin Monahan, the son of Karen Monahan, a woman with whom Ellison had a long-term relationship. Austin alleged that he had seen a video of Ellison abusing his mother. To date, no media source has been able to verify the existence of this video, which Austin says is not in his possession.

In a statement, Ellison, who is also the deputy chair of the Democratic National Committee, denied the allegation. “I still care deeply for [Karen’s] well-being,” he wrote. “This video does not exist because I never behaved in this way, and any characterization otherwise is false.”

As David Dayen reports in the latest print issue of The New Republic, Ellison is part of the larger movement of progressive Democrats running for attorney general positions in the states. “If elected, they could make up a new center of legal power in this country, building alliances across states and pooling resources,” Dayen wrote. “Someone like Ellison ... could exert a leftward pull on the law nationally.”

“When this moment in history is written, there’s got to be a chapter on state attorneys general, standing up for immigrants, standing up for students,” Ellison told Dayen in July. “It’s why I want to be a part of it.”