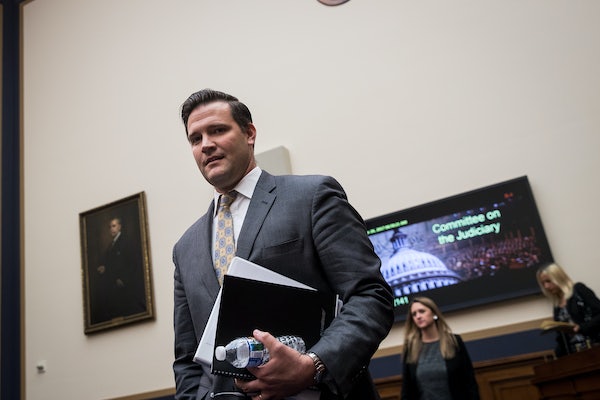 This Trump official thinks abortion is worse than the Holocaust.

Mother Jones reported on Wednesday that Scott Lloyd, who currently heads the Department of Health and Human Services’s Office of Refugee Resettlement, once wrote an anti-abortion manifesto so virulent that it shocked his classmates at the Catholic University of America’s school of law. The essay, which Lloyd submitted for a course in Catholic Social Teaching and which a former classmate leaked to Mother Jones, expressed outrage over an ex-girlfriend’s abortion—which he drove her to and helped pay for—and argued that if women didn’t want to be forced to give birth they shouldn’t have sex. Lloyd also embarked on an extended diatribe about the Holocaust, which Mother Jones quotes directly:

The Holocaust was the violent result of society assigning lesser value to a vulnerable segment of its population.  Abortion is the same exact thing. One can argue that we need to protect women, or they should be allowed to do what they want for their bodies. What prevents you from saying that German society needed protection and Germany was allowed to do what they wanted with their society?

The Jews who died in the Holocaust had a chance to laugh, play, sing, dance, learn, and love each other. The victims of abortion do not, simply because people have decided this is the way it should be, not through any proper discernment of their humanity. Neither type of murder is more or less tragic, but don’t fool yourself into thinking that they are not both tragedies, and they are not both murder.

It’s relatively common for pro-life organizations and individual pro-life activists to compare abortion to genocide; it’s less common, though still relatively prevalent, for activists to compare abortion to the Holocaust. If each abortion procedure murders a human being, the result is mass murder, or so the reasoning goes. But Lloyd’s essay takes the comparison a step further. Lloyd thinks abortion is actually worse than the Holocaust: that even though Jews were rounded up into cattle cars to face torture, forced labor, starvation, and death by poison gas, they got to be happy first, and thus abortion constitutes the more significant atrocity. Lloyd tries to distance himself from the implications of his argument by permitting his reader to feel equally sad about both events, but it doesn’t really work. The subtext is too loud to ignore.

To call Lloyd’s beliefs fringe would be an understatement: Elsewhere in the essay, Lloyd suggests pregnancy and childbirth are nothing compared to what Christian martyrs endured, ridiculing women who leave the Church over its abortion position. Lloyd’s essay obviously horrified his classmates, and the Catholic University of America doesn’t exactly have a reputation for attracting abortion rights activists. There’s no evidence Lloyd’s convictions have moderated. As head of ORR, he has repeatedly tried to prevent pregnant immigrant minors from getting abortions, and has forced them to visit religious crisis pregnancy centers.