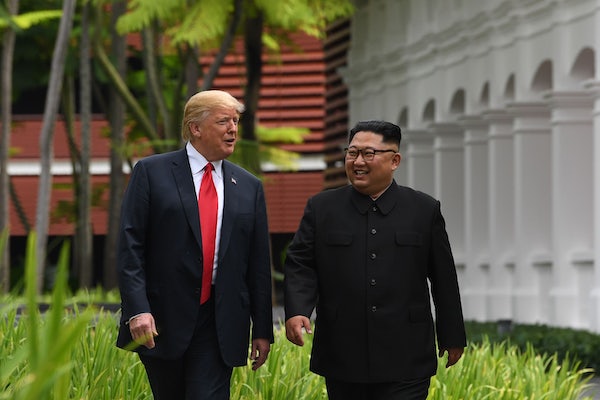 Trump’s North Korean love story is turning out to be a fantasy.

President Donald Trump loves touting his diplomatic opening with North Korea as one of the signature achievements of his administration, often speaking about it in extravagant terms that are closer to the language of romance than foreign policy. In a September rally in West Virginia, he detailed the history of his personal relationship with North Korean dictator Kim Jong Un.“I was really being tough, and so was he,” The president enthused. “We were going back and forth. Then we fell in love. OK? No, really. He wrote me beautiful letters. And they’re great letters. We fell in love.”

Like many love stories, Trump’s tale is turning out to be a fantasy. Trump claims that he opened up a new era of peace in the Korean peninsula by getting the North Koreans to agree to halt its nuclear and missile program in exchange for friendlier relations.

But, as The New York Times made public on Monday morning, North Korea’s nuclear and missile program continues unabated.  “North Korea is moving ahead with its ballistic missile program at 16 hidden bases that have been identified in new commercial satellite images, a network long known to American intelligence agencies but left undiscussed as President Trump claims to have neutralized the North’s nuclear threat,” the newspaper reports. “The satellite images suggest that the North has been engaged in a great deception: It has offered to dismantle a major launching site—a step it began, then halted—while continuing to make improvements at more than a dozen others that would bolster launches of conventional and nuclear warheads.”

Critics, including Jon Wolfsthal, the Director of the Nuclear Crisis Group at Global Zero, have long warned that a foreign policy based on wildly overselling meager results would be destabilizing. There are myriad ways the current situation could go awry. One possibility is that hawks in the Trump administration, such as National Security Advisor John Bolton, could now argue that diplomacy has failed and push for a return to the “bloody nose” strategy that Trump initially toyed with. That strategy includes launching a preemptive strike that could easily escalate into a region-wide war.

But even short of igniting a war, Trump’s policy carries other risks. It is already helping to discredit America’s reputation as a reliable ally and sober superpower.