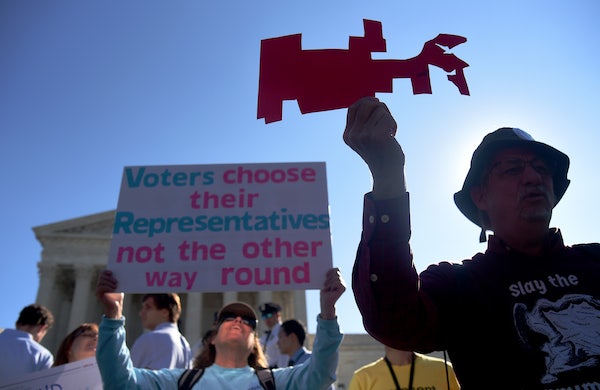 The state Democratic Party and a group of North Carolina voters filed a lawsuit on Tuesday alleging that Republican leaders violated the state constitution by redrawing the legislative maps to entrench their own power. “Partisan gerrymandering is an existential threat to our democracy, and nowhere more so than in North Carolina,” the plaintiffs argue in their complaint.

In the 2012, 2014, and 2016 elections, North Carolina Republicans captured supermajorities in both chambers of the state legislature despite winning only a narrow majority of the votes. They lost ground in this year’s midterms, but retained power thanks to a favorable electoral map. “In both the state House and state Senate elections in 2018, Democratic candidates won a majority of the statewide vote, but Republicans still won a substantial majority of seats in each chamber,” the plaintiffs note. “The maps are impervious to the will of the voters.”

The plaintiffs are seeking a ruling that partisan gerrymandering violates the North Carolina’s constitution rather than the U.S. Constitution. The distinction matters: The U.S. Supreme Court typically doesn’t review a state supreme court’s interpretation of its own state constitution. The high court declined to rein in partisan gerrymandering earlier this year, and Justice Anthony Kennedy’s subsequent retirement makes it unlikely that the justices will do so anytime soon.

As I wrote earlier this year, many state constitutions are written with broader protections of rights than the federal one, so they offer liberals a valuable opportunity to pursue their legal agenda even as the federal courts turn further to the right. Unlike its federal counterpart, for example, the North Carolina Constitution includes a clause requiring that “all elections shall be free.” With a 5-2 Democratic majority on the state supreme court, North Carolina could soon join Pennsylvania in un-warping its electoral maps.