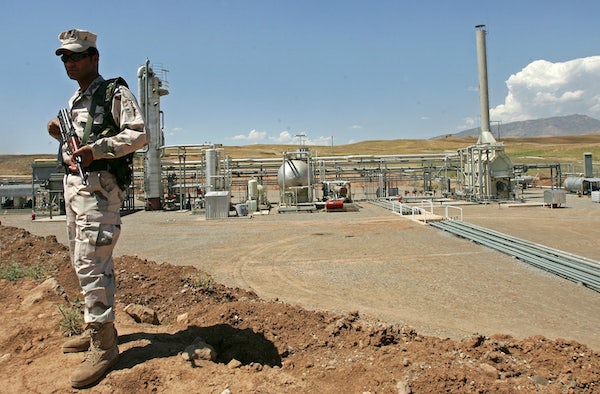 Trump reluctantly gives up his dream of plundering Iraq’s oil.

Axios is reporting that during the last two years President Donald Trump has repeatedly returned to the idea that the United States take Iraq’s oil as a payment for the cost of military conquest. A source told Axios that the most recent instance was in March when Trump was speaking to Haider al-Abadi, Iraq’s Prime Minister at the time. According to the source, Trump got “a little smirk on his face and he says, ‘So what are we going to do about the oil?’” Al-Abadi responded, “What do you mean?” Trump reportedly replied that, “Well, we did a lot, we did a lot over there, we spent trillions over there, and a lot of people have been talking about the oil.’” Al-Abadi fended off this comment by talking about working with American companies. Trump ended the awkward exchange by saying “I had to ask.”

According to another source that confirmed the story, White House staff was uncomfortable with the exchange. “It was a look down and reach for your coffee moment,” this second source said.

Trump seems to have given up on the plundering Iraq idea even though he has brought it up on several occasions. In 2017, then National Security Advisor H.R. McMaster explained to Trump why seizing the natural resources of another country was ill-advised. According to a source, the gist of McMaster’s argument was that, “It’s bad for America’s reputation, it’ll spook allies, it scares everybody, and it makes us look like—I don’t remember if he used words this harsh—like criminals and thieves, but that was the point he was trying to get across.”

The idea of plundering Iraq has long been a fixture of Trump’s politics. In 2013, he tweeted:

In September of 2016, then-candidate Trump summed up his views by saying, “You know, it used to be to the victor belong the spoils. Now, there was no victor there, believe me. There was no victor. But I always said: Take the oil.”

Although “take the oil” is a dead-end policy, Trump’s frequent recourse to this idea does help illuminate his worldview. Trump has a crassly materialist view of wealth, seeing it as embodied solely in physical goods rather than in trade relations. He can’t understand that America’s strategic interest is in maintaining a steady oil supply to keep the global economy running, with actual control of the oil wealth a secondary issue. This is connected to his inability to understand the importance of international institutions and trading alliances.