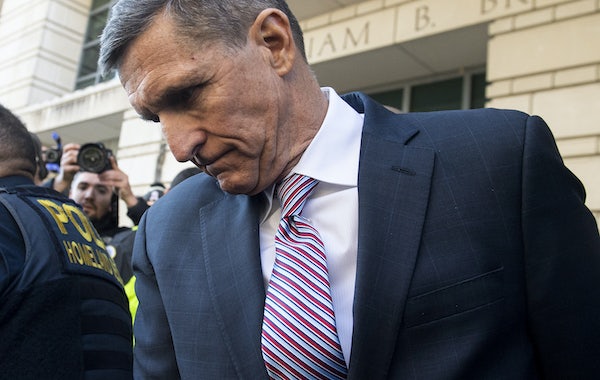 Judge to Michael Flynn: “Arguably you sold your country out.”

U.S. District Judge Emmet G. Sullivan presided over a sentencing hearing for former national security advisor Michael Flynn, postponing a final decision but lambasting the defendant in the strongest possible terms. Sullivan accused Flynn of acting as “an unregistered agent of a foreign country, while serving as the national security adviser to the president of the United States” (although later the judge qualified those terms).

“Arguably, that undermines everything this flag over here stands for,” Sullivan said, pointing to an American flag. “Arguably you sold your country out.” The judge also asked prosecutors if Flynn could be charged with “treason.” This was perhaps hyperbolic since the bar on treason is very high and does not cover Flynn’s action. The judge added, “I cannot assure you, if you proceed today, you will not receive a sentence of incarceration.”

As The Washington Post reports, “Flynn, standing straight and flanked by attorneys on either side, looked shaken, his jaw clenched. Sullivan declared a recess to let Flynn consider whether he wanted to proceed and let the judge impose a punishment, or to delay and cooperate more with the special counsel in hopes of leniency.”

The judge’s anger was rooted in the fact that although Flynn had pleaded guilty to lying to the FBI, his lawyers had talked as if the onetime White House official had been hoodwinked by the law enforcement agency. The judge’s harsh words got them to admit this was not the case. The judge insisted that Flynn concede that he was aware that lying to the FBI was a crime and that he was guilty of that offense. Flynn did so.

During the hearing, special counsel prosecutor Brandon Van Grack made a noteworthy admission: that Flynn could have been charged as an undisclosed foreign lobbyist for the Turkish government, as two of his business associates were last week.