The Nobel Prize–winning novelist recasts our relationship with the environment. 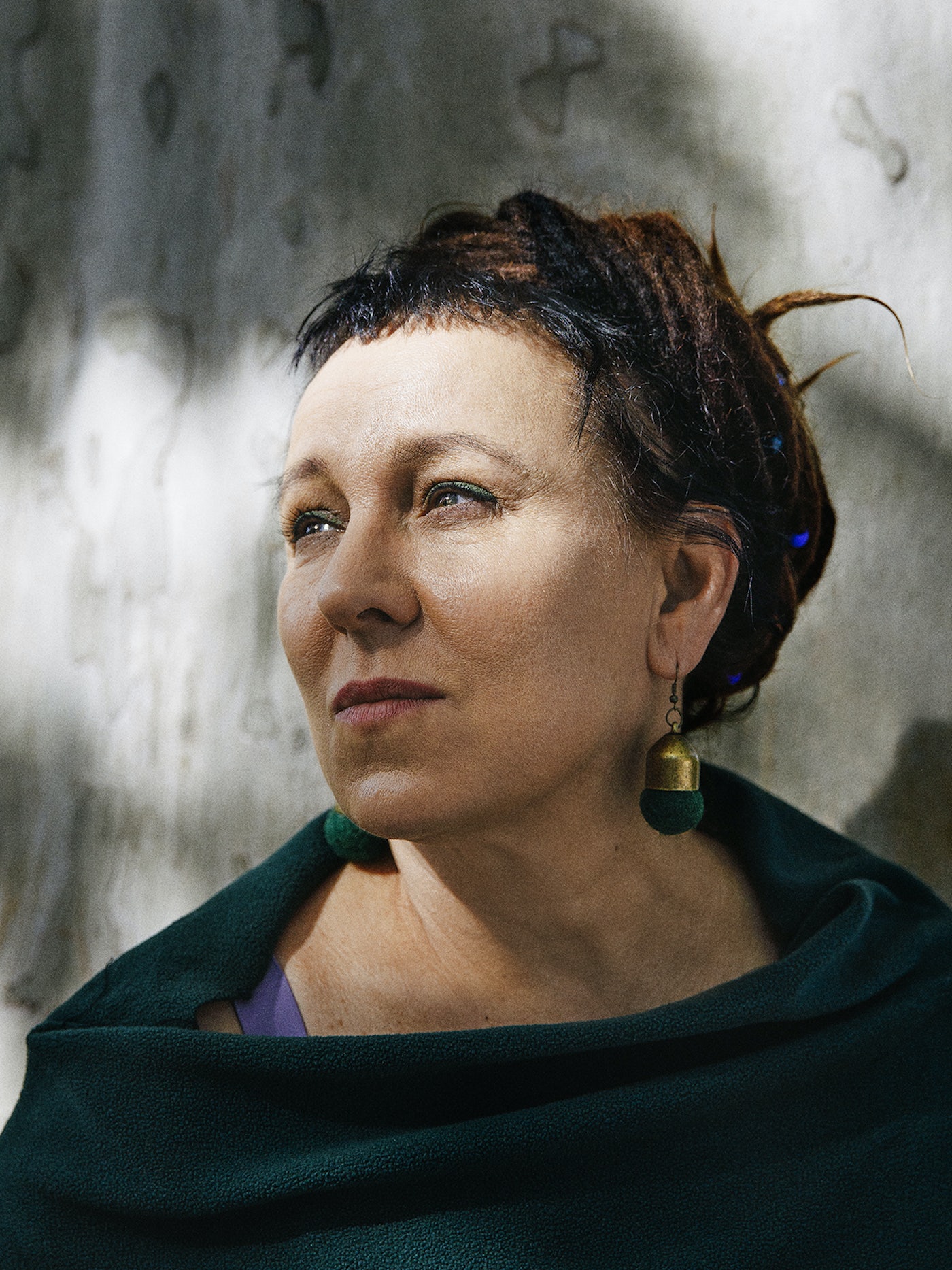 Murder mysteries, however else they might differ, rely on one major, shared belief: that murder matters, and is worth looking into. Whoever did the killing, whoever was killed, the investigation moves forward because the people inside the story and those outside of it, following along as the clues unfold, agree that the murder has moral weight, and ought to be solved. The Polish novelist Olga Tokarczuk’s Drive Your Plow Over the Bones of the Dead starts off with the discovery of a body, but before the body is cold, the narrator immediately begins to question its importance—was it a crime, a tragedy, a dishing out of just deserts, or maybe nothing as important as any of that, just another instance of the inevitable transformation that awaits all flesh? Which is to say the book doesn’t progress like a classic murder mystery.

Our narrator lives in a remote forest in Poland, on a plateau in the mountains near the border with the Czech Republic. It’s winter, and the little community, which during the summer is populated with families and professionals who come out from the city, has emptied. Only three people stay there through the hard winters: the narrator and her neighbors, Oddball and Big Foot. (She doesn’t like to use the unimaginative names assigned at birth—though readers will eventually learn hers: Janina Duszejko.) She is sure the townspeople regard the three of them as “old eccentrics” and “pathetic hippies.” Oddball has found Big Foot dead, and the two remaining go up to dress him properly and await the police. Big Foot seems to have choked on a small bone.

Janina, we learn as she narrates, loves calculating horoscopes (the book’s first of many references to a retrograde Mercury comes just a few paragraphs in), suffers from mysterious ailments, and often cries without seeming to understand why. She translates William Blake into Polish in the evenings, and leaves the weather channel on all day. She works as the off-season caretaker for her absent neighbors—the professor, the horror-story author, the grocery-store owners, and their “pampered children”—taking long walks through the town and forest and keeping watch over their empty houses. “Many people can afford to have one house in the city,” she explains, “and another—a sort of frivolous, childish one—in the country.”

She is matter-of-fact about things, and about people, whom she describes simply, brusquely, summing them up in a moment as one of those women with too fake a tan, one of those men who think they know everything. But when she describes the natural world, her voice goes tender. A couple of deer standing in the snow look as if “we had caught them in the middle of performing a ritual whose meaning we couldn’t fathom”; catching sight of a patrolling fox is “like seeing an old friend”; in the spring, she is attuned to subtle, fresh energies that nobody else can hear, “the rustle of the grasses growing, the ivy climbing the walls, and the mushroom spores expanding underground.”

And so it makes sense that, in the dead man’s home, she is straightforward enough about his body. “Just a piece of matter,” she notes, “reduced to a fragile object, separated from everything else. It made me feel sad, horrified.… The same fate awaits me too, and Oddball, and the Deer outside; one day we shall all be nothing more than corpses.” She doesn’t bother to eulogize him. He was a poacher, a crime that’s truly monstrous in her view. “The forest nurtured this little goblin,” she says, but he did not respect it. Instead, “he treated the forest like his own personal farm.” Only when she notices evidence of another death does she become truly upset. She spots the head of a deer in Big Foot’s kitchen—severed, the rest of its body butchered and eaten. At Big Foot’s house, the death that she registers as a crime isn’t his but the animal’s: “One creature had devoured another, in the silence and the stillness of the Night.”

A deadly spring comes to the plateau. Janina senses “a feverish vibration under the grass … as if vast, underground nerves, swollen with effort, were just about to burst.” After the poacher’s death, a local hunter is found dead, his body surrounded by hoofprints. Janina has a theory—that wild animals are taking their revenge on those who hunt them. A businessman goes missing from town, and some say he has just run off with his mistress, as he’s done in the past. But with a cataloging of his business interests—a delicatessen, fox farm, slaughterhouse, and meat-processing plant—his fate seems all but sealed. The police laugh at Janina’s theory, but her neighbors, returning with the warm weather, don’t. It seems right enough to the dentist, who says, “There has to be some justice, doesn’t there? Yes, yes. Animals.”

Janina and her strange plateau exist on the edge of the magical and the real. The people in town all have the same teeth—long, tinted bluish. A quirk of the minerals in the drinking water, or of genetics? A forester has wolf eyes, with oblong pupils. A stranger is seen in the forest and doesn’t come out at night. If a satyr or a centaur were to appear among the trees, it wouldn’t seem out of place. As the uncanny elements accrue, the description of Big Foot’s actual feet—with strange prehensile toes, covered in black hair—which seemed like nothing at the time, looms large. Who’s to say some frustrated herd of herbivores, peaceful by nature but pushed to the edge, hasn’t banded together to commit some murders?

But the town is also just a town, with policemen who humor a silly old woman, up to a point, where some friends come visit and eat baked goods and talk about poetry, and the eeriness vanishes like a menacing shadow when the lamp turns on. One night, Janina and a couple of visitors sit drinking and talking. The conversation turns to personality—why are some people prone to nastiness? The visitors list a host of reasons. Abuse, trauma, influences of television, maybe nutrient deficiencies. Janina insists on the influence of star signs, but it seems now like a flight of fancy. “‘But it is Saturn,’ I said, dying of laughter.” In a moment of levity, with other people around, all creepiness evaporates.

There is another thread at work in the book, a sort of essay hidden inside the novel. The murder mystery resolves one way or another, and the questions about killers and genre will be answered in satisfying ways. But along the way, Tokarczuk plants another seed: She wants to think about the rights of animals, to critique the way they have been erased (by most) from the moral world.

Tokarczuk, who is a vegetarian and animal rights activist, has said in an interview with the Polish quarterly Krytyka Polityczna (Political Critique) that her main character “just does not like the cruel killing of animals.” In the same interview, Tokarczuk said that humanity needs three inventions: contraception, the internet, and lab-grown meat. While most technofuturism suggests that advancements in machinery and efficiency will automatically solve problems of power, Tokarczuk recognizes that new technologies have to be designed specially to disrupt areas where the powerful have kept a tight grip—whether over the control of women’s reproduction, the free spread of information, or the lives and deaths of animals. (Vegetarianism in Poland is associated with leftist politics; in 2016, the far-right politician Witold Waszczykowski, then the foreign secretary, decried the idea that the world was “destined to evolve only in one direction—towards a new mix of cultures and races, a world of bicyclists and vegetarians.”)

“We live in the midst of a slaughterhouse and manage to ignore that,” Tokarczuk said. “Our great-grandchildren will tell shocked stories about the barbarism with which their ancestors murdered animals.” The novel incorporates these principles in its story, harnessing the propulsive power of the crime genre to get the reader to think with a different logic. Fiction is a good place to consider this kind of radical paradigm shift—a reader of a novel is already imagining other possible realities. Conjuring an enchanted forest and imagining a world without livestock slaughter are not such different mental projects. (The book takes its title from a work engaged in thinking the unthinkable: Blake’s slippery poem “Proverbs of Hell,” which outlines a radically new ethos—one that seems to embrace both vegetarianism and social transformation. “All wholesome food is caught without a net or a trap,” it says. And “What is now proved was once only imagined.”)

Like Blake, Janina sees herself as a prophetic figure and is always ready with an outsider-y harangue. In an outburst at the police station, she gives a speech about hunting, filled with what she calls unstoppable clarity, divine wrath:

Killing has become exempt from punishment. And as it goes unpunished … it doesn’t exist. When you walk past a shop window where large red chunks of butchered bodies are hanging on display, do you stop to wonder what it really is? You never think twice about it, do you?... Someone’s body is made into shoes, into meatballs, sausages, a bedside rug … Can it really be true? Is this nightmare really happening?

The plot moves on, but the moral center of the book is here in the police station, in a diatribe that continues for pages, articulating an idea both simple and ancient, disruptive and dangerous: that the suffering of animals matters, that their deaths carry moral weight.

The idea grows, partly through Janina’s many speeches, but also through the simple fact of her own belief. For all her brusqueness, and as much as men in the story write her off as hysterical, she seems to me a both likable and trustworthy figure. Janina’s version of a love scene is two lines mentioning that she invited a man to join her under her quilt, concluding, “as I am neither Maudlin nor Sentimental, I shall not dwell on it any further.” She flattens the differences between people and animals—always imbuing the animals with a little bit of inner life, always reminding the humans that their material bodies are also made of meat. Confronted with the first death, she thinks: “The same fate awaits me too, and Oddball, and the Deer outside.”

Reading this novel, I sometimes had the unsettling sensation that I was being told a fairy story from the perspective of the witch. She lives alone in the forest, feels kinship with bats, falls into meandering visions and blistering rages, practices divination, talks with ghosts in the night. Her insistence that animal suffering matters is itself a kind of spell. The opposite idea is so firmly woven into our culture that reversing it would be a kind of magic.

Rachel Riederer is a science and culture writer based in Missouri.