What Woodrow Wilson Did to Robert Smalls

The twenty-eighth U.S. president was a white supremacist. We all know this, in the abstract. But here’s how he wielded his racism against one accomplished Black American. 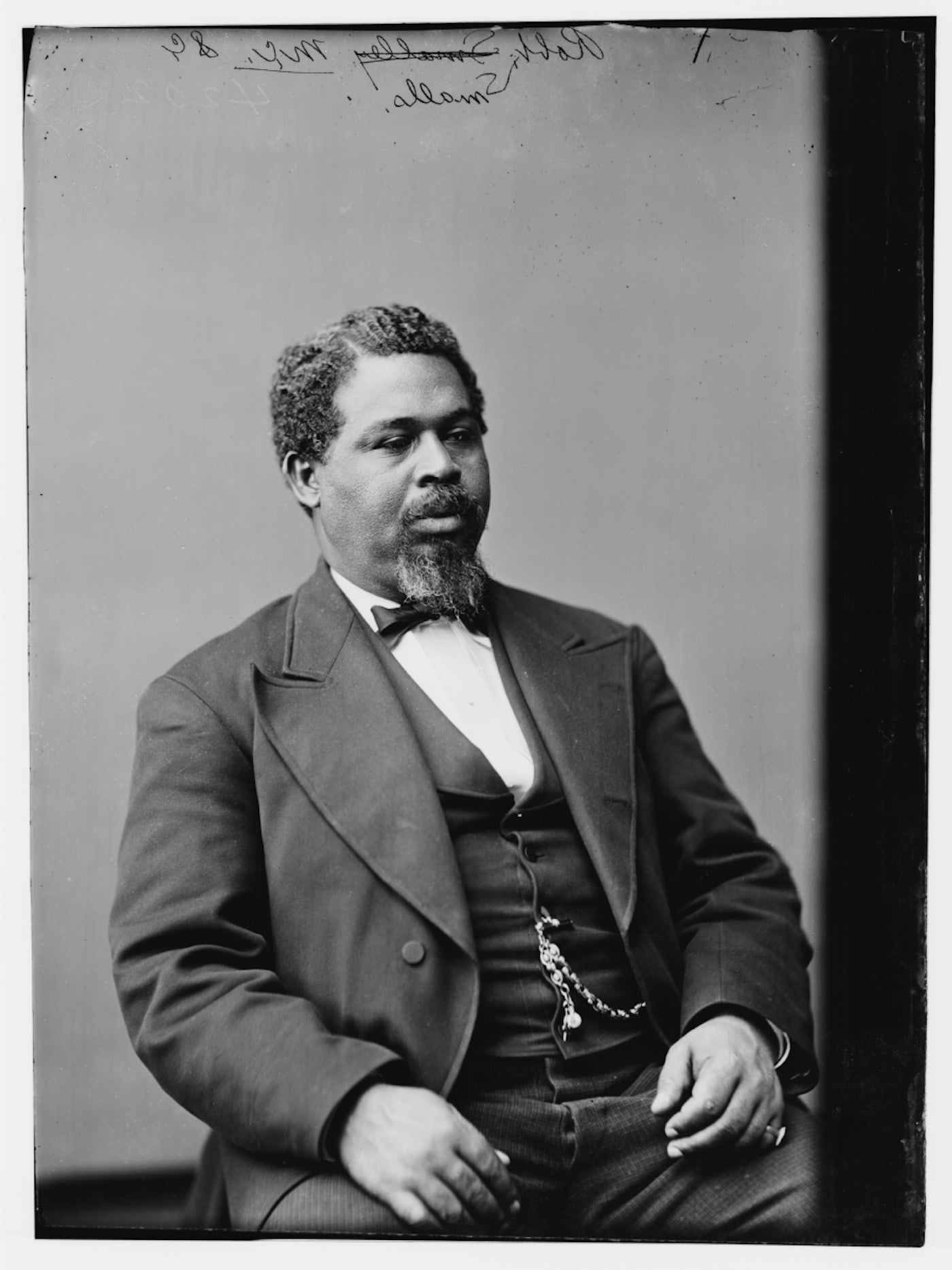 Last week, Princeton University announced that it would remove Woodrow Wilson’s name from the School of Public and International Affairs because his “racist thinking and policies make him an inappropriate namesake for a school or college whose scholars, students, and alumni must stand firmly against racism in all its forms,” said the university’s president, Christopher L. Eisgruber. “Wilson’s racism was significant and consequential even by the standards of his own time.”

Donald Trump’s fulminations aside, it seems most people don’t care about Princeton’s gesture, especially if that’s the extent of our cultural reckoning with the former president. The move hasn’t been met with the same furor as, say, efforts in D.C. to remove a statue of Abraham Lincoln standing beside a kneeling freed slave: Even National Review, home of “The Cancel Counter,” refuses to rush to Wilson’s defense.

But this moment is a unique opportunity to learn about the Black Americans who suffered at Wilson’s malicious hand—to raise their names as we tear down his. So here’s a story about the intersecting lives of three men: the twenty-eighth president of the United States, the author whose book became the basis for D.W. Griffith’s Birth of a Nation, and the former slave who became a Civil War hero and one of the first Blacks to serve in Congress.

The legend of Robert Smalls begins on May 13, 1862. A 23-year-old slave, he worked as a sailor on The Planter, a 300-ton commercial steamship retrofitted as a Confederacy war vessel that was docked in the harbor of Charleston, South Carolina. Just before dawn, Smalls and his fellow enslaved workers seized the boat and, after stopping to pick up family members and other Black men and women involved in the plot, sailed out of the harbor past Confederate checkpoints. They then surrendered the ship to nearby Union forces, for which they were rewarded with money and freedom.

For the next three years, Smalls fought for the Union. When the war ended in 1865, he returned home to Beaufort, South Carolina. With his reward money, he bought the house that once belonged to the first two people to own him as a slave: his father and his half-brother. Except for brief periods, he would never leave. “I was born and raised in South Carolina,” he once said, “and today I live on the very spot on which I was born, and I expect to remain here as long as the Great God allows me to live.”

Smalls founded the South Carolina Republican Party in 1867 and, in 1868, joined 71 Black delegates to the state convention that ratified the Fourteenth Amendment to the U.S. Constitution. In that same convention, Smalls and his fellow Black delegates adopted a progressive state constitution, providing for public education, abolishing race and property ownership as conditions for holding public office, and overturning Black Codes. He would live long enough to see his achievement dismantled in 1895, when whites regained power in South Carolina and adopted a Jim Crow Constitution. As one state newspaper put it at the time, “We can trust white men to do right by the inferior race, but we cannot trust the inferior race with power over the white man.” With some amendments, that constitution remains in effect to this day.

In the years in between, Smalls was first a state representative, then a state senator, and finally, between 1875 and 1887, a U.S. representative. He served in Congress alongside Richard Cain, the pastor of Emanuel African Methodist Episcopal Church, where, in 2015, Dylann Roof murdered nine Black congregants. He represented the 7th congressional district, then the 5th district; once white Southern Democrats regained power, Smalls was the last Republican to represent the 5th for nearly 130 years, until 2011, when Mick Mulvaney, Donald Trump’s former chief of staff, won the seat as part of the Tea Party wave that rose in opposition to the election of the first Black president.

But it was while serving in the South Carolina legislature that Smalls first crossed paths, unbeknownst to him, with Tomas Dixon Jr. The latter was just eight years old when his uncle took him to observe the proceedings of the statehouse. Dixon would go on to author The Leopard’s Spots: A Romance of the White Man’s Burden, The Clansman: An Historical Romance of the Ku Klux Klan, and The Traitor: A Story of the Rise and Fall of the Invisible Empire. Dixon claimed that the memory of “ninety-four Negroes, seven native scalawags and twenty-three white men” debating affairs of state moved him to set the record straight on Reconstruction with his white supremacist trilogy.

Griffith’s movie, which drew heavily from The Clansman, opened on February 8, 1915; Smalls died two weeks later; it’s unlikely he ever saw it. The movie proved popular in part because Dixon enlisted the help of a powerful friend to promote it: President Woodrow Wilson, whom he’d met at Johns Hopkins University. Wilson screened the film in the White House and helped arrange a viewing for members of Congress and Supreme Court justices. When Black people urged a boycott of the film over its portrayal of newly freedmen as bloodthirsty savages, newspapers reported that the president himself had seen and liked the film.

Wilson promoted the film not just out of loyalty to his college friend but because Wilson himself was an avowed white supremacist who, even by the mores of his time, held Black people in the sort of racist contempt that even his gracious manners and urbane sophistication could not hide. As president, he reinstated Jim Crow in Washington, D.C., after the city had gone a long way toward ending it. But he did not limit himself to just the nation’s capital: He ordered the elimination of all senior positions in the federal government where Blacks supervised whites. One of the federal officials Wilson arranged to have fired was a Black customs inspector living out his last years in Beaufort, South Carolina: Robert Smalls.

As president, Wilson can rightfully be credited with a number of achievements. He was, in his day, and indeed even in the context of our times, a progressive. He was also a man born into a family that benefited from slave labor, whose theologian father preached that God commanded Black people to be slaves, and whose vast education never disabused him of the belief that Black people were his inferiors. That belief led him to visit incalculable pain and hardship on millions of people at home and abroad when, among other things, he had U.S. Marines occupy and establish a system of forced labor in Haiti that in effect reinstituted slavery in the very first Republic to have abolished it, back in 1803.

Smalls will never be as well-known as Wilson. In the hard calculus of affairs of state, perhaps Wilson counts more than Smalls. But on a human level, Smalls was a larger and better man than Wilson. We should be able to speak that plain fact without nostalgia, condescension, or defensiveness for the quite simple reason that the distance Wilson traveled from his privileged upbringing to the presidency of Princeton, to the governorship of New Jersey, and the presidency of the U.S. is objectively much shorter than that which Smalls traveled from being enslaved by his own father to fighting for the Union, to ratifying the Fourteenth Amendment, and representing the people of South Carolina in Congress.

In the end, it doesn’t matter terribly much whether Princeton removes Wilson’s name. He did destroy a generation of the Black middle class, and he did take away a freedom Haitians had fought a war of independence to earn. And yet, it should scarcely be surprising that an American university would choose to name a school of international affairs after one of its former presidents who, among other achievements, saw the country through World War I and was an intellectual architect of the precursor for the United Nations.

Smalls was 75 years old when Wilson, who probably never met the man and would have considered it beneath his dignity to be in the same room with him, reached down from the Oval Office and, with a small act that is not even granted a footnote in most surveys of Wilson’s legacy, capsized the last years of a Black man whose generation made America free. That’s as good a synopsis of the reality of white supremacy as one may get.

Aderson Bellegarde François is a professor of law and director of the Civil Rights Clinic at Georgetown University Law Center, where he litigates pro bono civil rights cases and writes about law, slavery, and Reconstruction.