Why Landlords Target Mothers for Eviction

Mothers are being evicted far more frequently than other Americans. This is the hidden story of America's looming housing crisis. 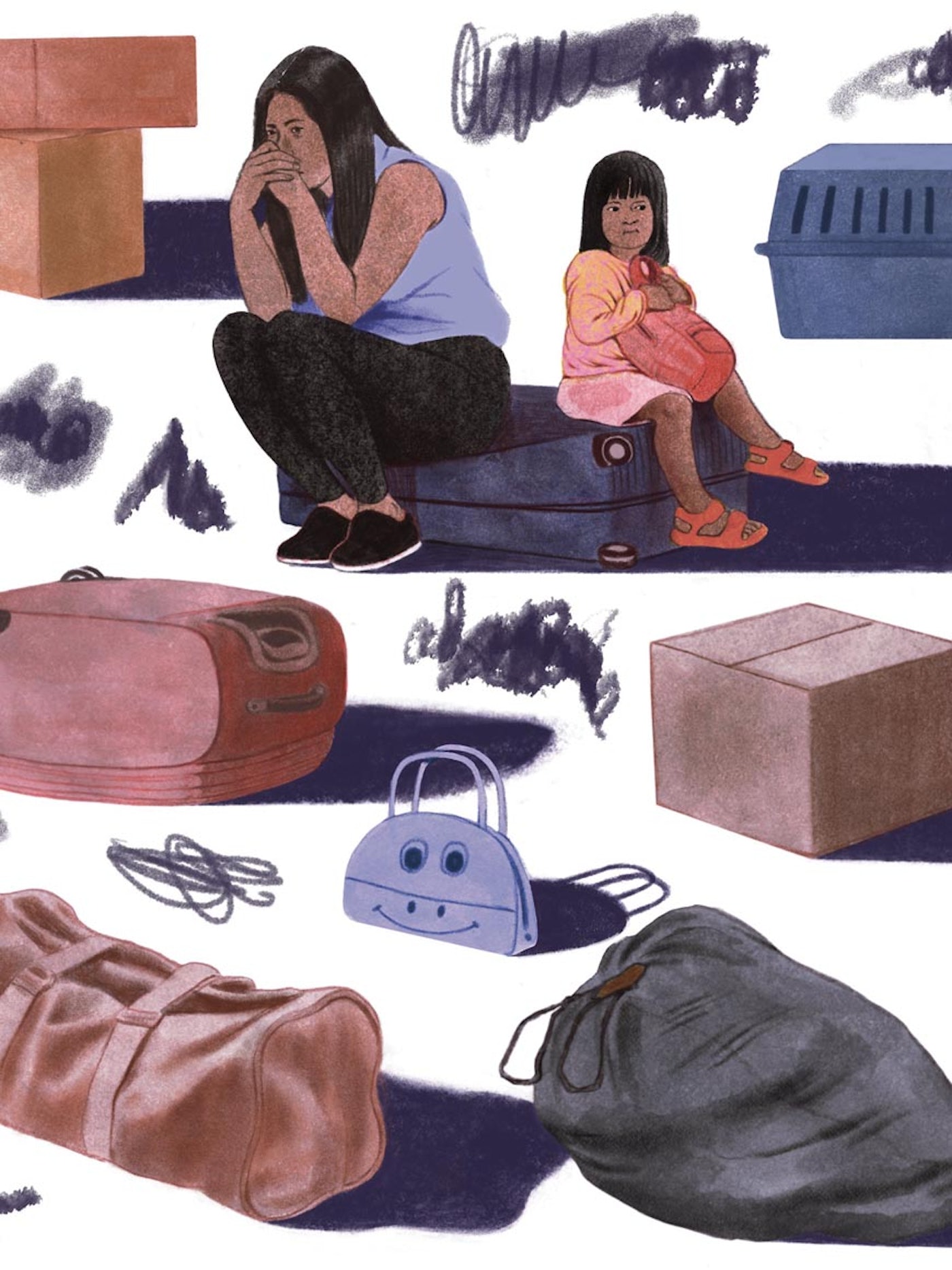 In February, a white man showed up at Patricia Mendoza’s door and informed her that the month-to-month lease for her two-bedroom apartment in Imperial Beach, California, would be terminated on April 10. He was speaking so loudly that her daughter began recording him on her phone; inside, Mendoza’s son began to cry. They had been through two eviction attempts since the pandemic began last March. Now, they would have to fend off another.

Before the pandemic, Mendoza told me, she would have said the worst thing that had ever happened to her was her divorce. “It was a dark time in my life,” she said, but “nothing compared to what my struggle is now.” She has had seven asthma attacks over the past year. And while she used to be able to sleep like a “grizzly bear,” she said, now, some nights she can’t sleep at all, unable to breathe from what she describes as “little panic attacks.” But she has always refused to be evicted. After the man delivered the eviction notice, she went inside and hugged her children. Through her own tears, she told them, “When has mommy ever let you down? We’re in this together, we’re going to stay here. Don’t you worry.”

Mendoza is one of the 10 million Americans currently at risk of eviction. More often than not, they are mothers. Having children is the single greatest predictor of whether someone will face eviction. It can be difficult to make rent and support a family, especially for women of color, who on average are paid less than white women, and single mothers living on one paycheck. Landlords—eager for an excuse to rid themselves of tenants whose children might cause noise complaints or property damage, or for whom lead hazards have to be abated or child services called—are often all too happy to begin eviction proceedings.

Even before the pandemic upended millions of lives, housing in the United States was in crisis, with four evictions filed every minute. Now, we are hurtling toward catastrophe. In September, the Centers for Disease Control and Prevention issued a moratorium on evictions for those who have suffered financial setbacks during the pandemic, but it has gaping loopholes and is slated to expire on March 31. Every day, all across the country, mothers are clinging to their homes, and their children, telling them everything will be OK, even when it is far from clear when they will be able to return to work, or when this will all be over.

Mendoza has worked since she was young. Her father, who brought her family to California from Tijuana when she was a baby, taught them never to “ask anything for free.” But when the pandemic hit, she lost her job as a medical transportation driver, ferrying people to their doctors and chemo sessions. Her last day on the job was March 26, 2020. She was let go on April 5. She wants desperately to work again, but every opening she sees is for an in-person job, and she worries about contracting Covid with her asthma. Her Facebook feed is littered with friends who have lost parents, friends who are gone themselves.

Even before the pandemic, her $2,000 income from her job and $455 in child support barely stretched to cover her $1,500 rent and other necessities. There were times she couldn’t afford sanitary napkins, forcing her and her daughter to use socks. But she managed to make ends meet. “I always put food on the table for my kids,” she said. “They might not have what they want, but they have what they need.”

If the CDC’s moratorium expires on March 31, millions could abruptly lose their homes.

After Mendoza lost her job, she couldn’t afford both rent and the internet her children needed to attend school, and her landlord wanted her out. In September, the property was sold to a new owner, who sent Mendoza a letter saying she, too, was a single mother. But in a paragraph at the bottom, the new landlord informed Mendoza she would have to vacate in 60 days. She was shocked. “I have a governor who’s telling me to shelter in place, but I have this landlord who’s telling me to get the hell out,” Mendoza said.

Then came the harassment. One morning, her daughter went to use the bathroom and found no water coming out of the taps; the owner, Mendoza said, had shut it off. Workers cut her internet as her daughter was taking a final exam. The landlord switched the electric bill to her own name, racking up a $200 bill that Mendoza couldn’t pay.

The property was sold again in December. It was a “bittersweet” Christmas, Mendoza said, because she couldn’t afford any gifts, but they were able to celebrate in their apartment. She was optimistic about the new owner when we first spoke in early February. The next day, he told her she had until April 10 to leave.

One eviction kicks off a vicious cycle. Any woman who has an eviction on her record will have a harder time convincing another landlord to rent to her, whether or not the eviction was filed fairly. That often pushes her into substandard housing from even less scrupulous landlords, many of whom jack up rents knowing their tenants have nowhere else to go.

The only two times Bathsheba R. Collingwood managed to get her own apartment in Orlando, Florida, she ended up with an eviction notice. The first came in 2017, when she had to stop delivering Chinese food just after giving birth to her youngest son. After she fell behind on rent and was evicted, she reluctantly moved in with her mother, but this past January they had a heated argument, and Collingwood moved into her car. When the stay-at-home orders came, she knew she needed to find an apartment, but her record limited her options. She took her current one because she knew the landlord wouldn’t look into her background and see that 2017 eviction.

What’s needed are new laws to let people scrub evictions from their records and to guarantee legal counsel in civil cases.

It’s not cheap: Rent is $925 a month. But as soon as she moved in, she realized it was a “slum,” she said. She waited a month and a half for hot water to be turned on; in the meantime, she boiled water to bathe. The bathroom tiles are loose, the light fixtures rusted. One night, she woke up to a palmetto bug crawling under her sheets. The bugs bite her son at night.

She worries the apartment is making her family sick. There’s mold everywhere, even on her son’s toys. Her 13-year-old daughter complained of headaches and dizziness, and started coughing. Eventually, she sent her to live with her mother.

Before the pandemic, Collingwood made roughly $20,000 a year braiding people’s hair in their homes. That, along with a few hundred dollars a month from the Supplemental Nutrition Assistance Program, was enough for her and her family to “be OK,” she said. But no one wanted her to braid their hair when the pandemic hit, and even now she only sees two or three clients a month for between $30 and $80 a pop. She supplemented her income by delivering Chinese food again. Then, in August, she got a surprise $600 electric bill. She had to keep the lights on for her children, and the fridge running to keep the food from spoiling, so she paid that bill instead of rent.

Ever since then, her landlord has been trying to evict her. The CDC’s moratorium on evictions protects her for now, but if it expires at the end of March, she and millions of others could abruptly lose their homes.

Just before the pandemic, a group of Black mothers in Oakland calling themselves the Moms 4 Housing refused to leave a vacant home they had occupied and fixed up, declaring that housing is “a human right.” Sheriffs with AR-15s and riot gear removed them, but the group later negotiated the sale of the home and sparked a national conversation about the right to housing. Those mothers—Sameerah Karim, Tolani King, Sharena Thomas, and Dominique Walker—are now advising others on how to defend their families against eviction.

When the pandemic first hit, Mendoza had no idea how eviction worked; she’d never been through one and thought any knock on the door was the sheriff about to force her and her children to leave. One day, a man named Carlos with the Alliance of Californians for Community Empowerment called her to check in. “I just started crying like a baby,” she said. “I think we were on the phone for an hour and a half.” That was how she learned about her rights—and got plugged into a new movement preparing to fight back against eviction.

“Where the hell are me and my kids going to go if I have no income, I have no job?”

Educating mothers about their rights may help combat the coming wave of evictions. There are some federal protections against familial discrimination, which should make it illegal to target mothers. A few jurisdictions require evictions be for a just cause. But those laws are patchy at best. And even the most robust education efforts wouldn’t be enough to solve the deeper problem. What’s needed are new laws to allow people to expunge evictions from their records, giving them a better chance at finding housing, and to guarantee legal counsel in civil cases, like evictions. Emily Benfer, a law professor at Wake Forest, argues that eviction courts should be significantly reined in, so they can no longer act “as a debt collection device.” She thinks property owners should only be able to use them to regain access in emergency situations.

Ultimately, the goal should be to move “toward a right-to-housing model,” Benfer said. Policymakers have toyed with the idea before. President Franklin D. Roosevelt folded housing into his Second Bill of Rights. The Housing Act of 1949 included “a de-cent home and a suitable living environment for every American family.” Now there’s a push for social housing built by the government and offered to those who need it.

Most immediately, though, the country needs a strong, blanket moratorium on all evictions until the Covid crisis truly subsides, coupled with rent relief or cancellation, as well as financial assistance for needy landlords to prevent a cascade of evictions once the bans are lifted.

These are realistic goals. And organizing could be the key to achieving them. It took eviction defense actions during the Great Depression to impose moratoriums. The civil rights movement resulted in thousands of newly mandated housing standards.

When I asked Mendoza what she’ll do if evicted in April, she joked that she might just move into the governor’s mansion with her kids. Then, her voice lowered. “Let’s just be so real right now,” she said. “Where the hell are me and my kids going to go if I have no income, I have no job?” It’s a question that has for too long haunted mothers just trying to keep their children safe and housed. But Mendoza and her fellow organizers are ready to fight for changes that could finally silence it.

Bryce Covert is a contributor to The Nation and The New York Times. She covers the economy.