The Crisis in Home Care

The way we look after the elderly in this country is broken. But is funneling money into home care enough to solve the problem? 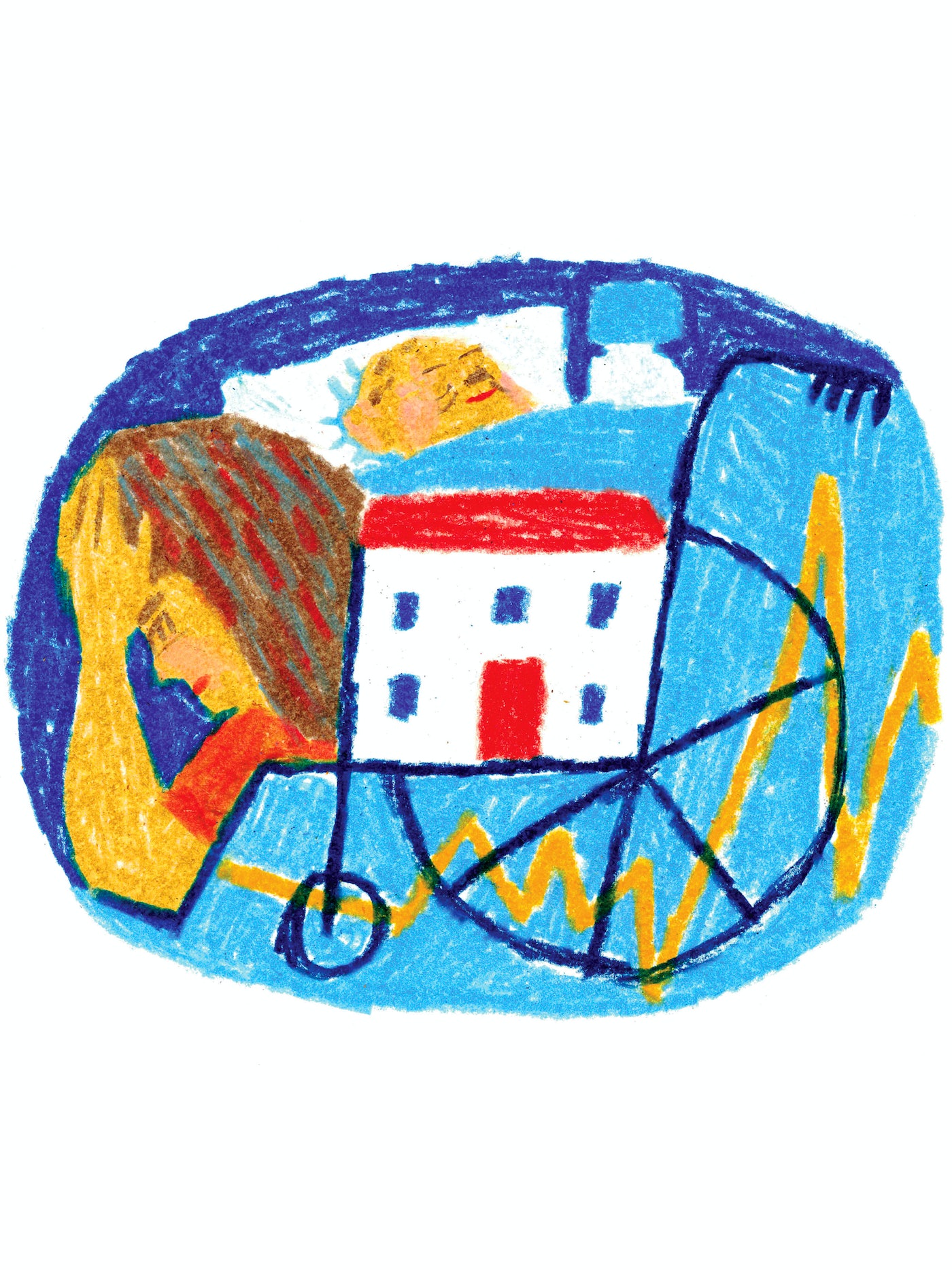 Kara Ward started her life as a caregiver earlier than most people do. She was only 29 when her mother was diagnosed with brain cancer in 2006. Ward had two young children of her own at the time—a toddler and an infant—and still she found herself caring for her mom, whose cognitive abilities declined almost as soon as she was diagnosed.

Ward is the older of two children, and lived about an hour from her parents, in Fredericksburg, Virginia. Her younger brother was just out of college, “and just not capable, I think, of handling it emotionally or physically,” she told me. I asked Ward if she had felt capable. “I didn’t have a choice, so yes. I think if I looked back, I would say, ‘God, no, nobody’s really capable of that.’ But when you don’t have a choice, it’s amazing what you can do.” Her mother died within five months.

These days, Ward cares for her grandmother, now 94, who lives a few minutes away from her in Charlottesville, in her own apartment. Ward is lucky in many ways—she has a good job, as an assistant director of marketing at the University of Virginia McIntire School of Commerce, disposable income, a supportive family, and a home health care aide who comes occasionally to assist with the physical care her grandmother needs, helping her get around and take her medicines. Ward is able to pay for this help by pooling her own resources with those of her grandmother and her father, and by relying on supplemental private insurance plans. Still, it’s expensive. The family hires its own health care providers; relying entirely on an agency, Ward said, would cost more than $200,000 a year. Of course, many Americans are far worse off than Ward. But even for those able to pay for professional assistance, caregiving takes a toll on emotional and mental health, as they watch a loved one slip away.

Ward serves as a life manager for her grandmother, hiring the aides who come, making sure all of her appointments are scheduled and attended, the bills paid, the prescriptions filled, the groceries purchased, and everything big and small is attended to. The pandemic made this work much harder. Not only did her family face the challenges of working from home and going to school remotely, but several of her grandmother’s home health aides were reassigned or took positions in nursing homes and hospitals to help with the fallout from the pandemic, and Ward struggled to find consistent care providers from a dwindling pool of potential employees. If she finds herself with a spare minute, it’s soon filled with the worry that she’s forgotten something she needs to do for one of the people in her life for whom she’s responsible. Often, the last person on that list is herself.

“Maybe just a couple of years ago, I realized that I had to make some changes,” she said. “My fear was this is going to kill me.”

The challenges professional home health aides face are well known: They struggle with low pay, irregular hours, and dangerous, unregulated work. But there’s another health crisis unfolding quietly alongside it, as one in five Americans provides the unpaid labor of caring for a loved one, their stress and pain going unacknowledged. Their numbers will only increase as Americans continue to live longer, and as the lasting effects of the pandemic change the way we deliver elder care in this country.

When the Covid-19 pandemic hit last year, it threw into sharp relief the shortcomings of our care system for adult dependents, especially the aging. At least a third of the reported coronavirus deaths occurred in nursing homes and long-term care facilities for the elderly. Black and Latino nursing home residents were disproportionately hard hit. And as a result, some Americans began to consider moving their elderly family members back into their homes to avoid the potential of exposure to viruses, should another pandemic rage. The National Alliance for Caregiving and AARP estimated that more than one in five Americans served as a caregiver for an adult or child with health or functional needs in 2020, a 9.5 million increase since the survey was last released, in 2015.

Last year, three geriatricians—Madhuri Reddy, an instructor in medicine at Harvard University, and Nathan Stall and Paula Rochon, then both at the University of Toronto—wrote in The Conversation about how this increased demand for home health care aides could stress an already stressed system. Even before last year, there were huge staffing problems in home health. Aides were paid a median wage of $12 an hour; and more than one in four had no health care coverage themselves, even though many belong to ethnic groups disproportionately affected by Covid-19.

To address the staffing shortfall, Democrats included provisions in Joe Biden’s American Rescue Plan Act, which passed in March, to increase the budget for nursing homes and in-home care, the latter by more than $11 billion. What the bill doesn’t address, though, and what no plan so far has, is the very common plight of an unpaid family member helping to manage the life and care of a loved one. The biggest certainty in aging is there’s a lot of uncertainty: New, unexpected problems pop up with increasing frequency, until they become too much for any one person or any one family to bear. The least well-off seniors are much less likely to have a choice in their care at all, because the costs of home health care are too high for their families to cover. They often rely entirely on family caregivers, who tend to burn out quickly and can’t always meet all of their loved ones’ needs.

The demographics of caregivers skew female, but otherwise nearly match the demographics of the country: 61 percent are white, 14 percent are Black, 17 percent are Latino, and 5 percent are Asian American. Many still maintain full-time jobs even as the caregiver role takes up much of their time. I spoke to four care-givers, all of whom were still working, and all of whom could afford some level of assistance, either through insurance programs, such as Medicare and Medicaid, or through their household budgets. They all acknowledged that they had fewer challenges than families who could not afford to hire home health aides and agreed that the wages of the home health workers should be higher in general, which would help both the workers and the families who rely on them.

But their experience also points to the need for some kind of financial support for caregivers. Denise Brown, the founder of the Caregiving Years Training Academy, an online research and training program for caregivers, said a program like a universal basic income might assist caregivers, and Ward mentioned flex work, allowing women to have more flexibility in where and when they work. They all thought that the issues adult caregivers face were overlooked, perhaps because the subject touches on our mortality, a topic that affects everyone but that no one is eager to experience. Discussing how we age means concentrating on one of the most difficult and fraught periods of our lives: the end. “Nobody wants to talk about dying, and nobody wants to talk about getting sick,” said Maureen Rafa, who cares for a dependent sister. “Except only the lucky 10 percent or so of the population that just die in their sleep or have a sudden heart attack, the rest of us die inch by inch.”

The broader crisis in elderly care also exposes a more fundamental problem in this country. The United States focuses its resources, its social safety net, and its policies on people who are in the workforce. From health care to the school system to our retirement programs, we identify people as current workers, future workers, and past workers. Americans tend to put less value on labor done outside of a paid job, the everyday work of feeding, clothing, entertaining, and loving others and ourselves. This is the work that caregivers do, as age prevents their loved ones from doing those critical tasks on their own, and it is fundamental to a functioning society and to a sense of community. Everyone I spoke to wanted the United States to find ways to value that—not just as labor, but as an important part of life.

Monica Potts is a freelance writer based in Arkansas.