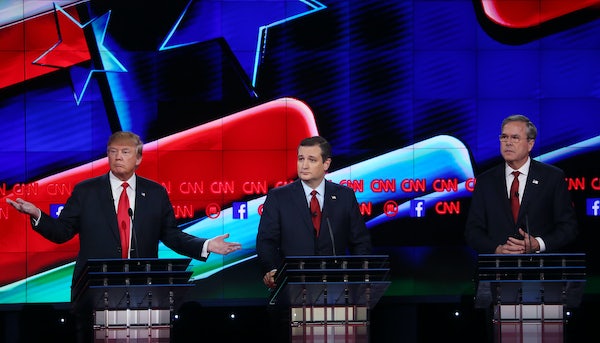 If you blinked, you would have missed the only time the Paris climate talks came up in the GOP debate.

Republicans have been in their own orbit on climate change, curiously silent on the subject after 195 countries wrapped up a historic climate agreement in Paris.

While international issues—specifically ISIS—dominated the fifth GOP debate on Tuesday night, the proceedings never directly touched on the climate conference.

The few times it came up were in passing jabs. Ohio Governor John Kasich said his top priority was defeating ISIS. “And when I see they have a climate conference over in Paris, they should have been talking about destroying ISIS,” he said, “because they are involved in virtually every country, you know, across this world.” Kasich seemed to suggest France made a mistake in continuing with the climate conference in the wake of terrorist attacks in Paris. France, a leader on climate, would disagree with that.

There was a moment where it looked like CNN moderator Wolf Blitzer was preparing to bring up the conference, when he said he’d ask about other world threats that weren’t related to the Middle East. He pivoted to China, crashing my hopes the GOP would have to address how they plan to ignore a climate deal every one of our allies supports.