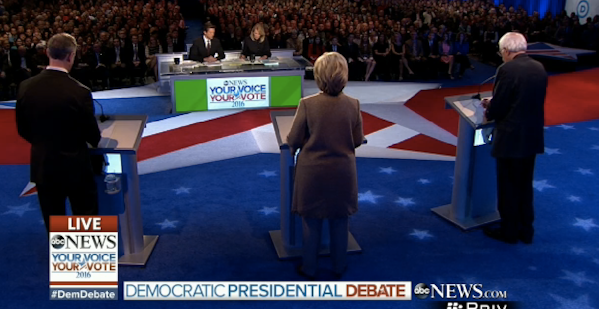 Climate change only came up in the first and last minute of the Democratic debate.

The fifth Republican debate this week was curiously silent on the landmark Paris climate agreement. Surprisingly, Democrats largely skipped over it as well in their third debate Saturday night.

Bernie Sanders mentioned it in his opening statement. “I’m running because we need to address the planetary crisis of climate change and take on the fossil fuel industry and transform our energy system away from fossil fuel to energy efficiency and sustainable energy,” he said.

Martin O’Malley cited it in his closing remarks, saying “Climate change is the biggest business opportunity to come” in 100 years.

You could argue there isn’t anything to debate, since all three Democrats agree climate change is an imminent threat. However, there is disagreement when it comes to the Paris deal—which would have been great to hear more about. Clinton embraced it last week as “an historic step forward in meeting one of the greatest challenges of the 21st century.” Sanders was less optimistic. “While this is a step forward it goes nowhere near far enough,” he said last Saturday.

According to a November New York Times/CBS News poll, nine out of ten Democrats say global warming is or will have a serious environmental impact. Some 60 percent of Democrats and 54 percent of voters under 30 say they worry about climate change a “great deal” or a “fair amount.”

It’s not as if the Democratic base doesn’t want to hear more.