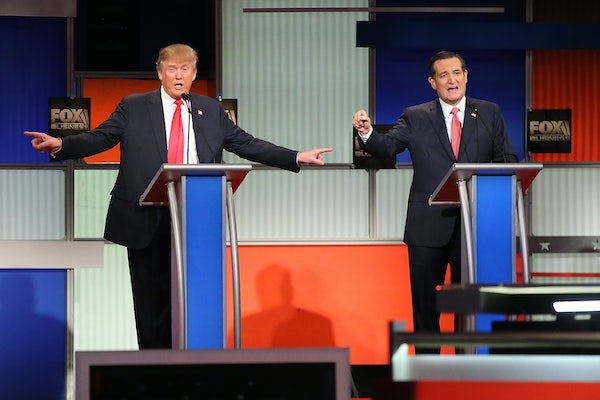 And then there were seven, participating in a debate in Charleston, South Carolina, that was characterized above all by the fawning questions the Fox Business Network moderators laid before the feet of the candidates. Still, there were signs of life. Jeb Bush politely asked Donald Trump to “reconsider” his proposed ban on Muslim immigrants; Trump declined. Ben Carson showed the audience what his daydreams look like. Chris Christie, who made his name lashing out at mild criticisms, called the president of the United States a “petulant child.” John Kasich outlined a plan to freeze every single government regulation, even the ones that are good for you. Rand Paul, who was excluded from the debate, gave everyone else the finger.

That leaves the three candidates who have been deemed the leaders in this race: Trump and Ted Cruz, the two strongest contenders for the nomination, and Marco Rubio, who is included in these conversations because the establishment still insists one of its own can win. The establishment could very well be right, but even though Rubio was shriller than usual, he otherwise failed to distinguish himself at the debate. Trump and Cruz tangled several times: over Cruz’s eligibility to run, over Cruz’s Goldman Sachs loan, over Trump’s “New York values.” Cruz didn’t necessarily win these confrontations, but he alone of the candidates has found a way to debate Trump, absorbing his blows, drawing him into a morass of technical arguments, and turning the debate into a game of rhetorical oneupmanship—all of which forced Trump to fall back on blunt force: “I was born here!”; “9/11!”

For that achievement (?), we declare Cruz the winner of the sixth presidential debate.