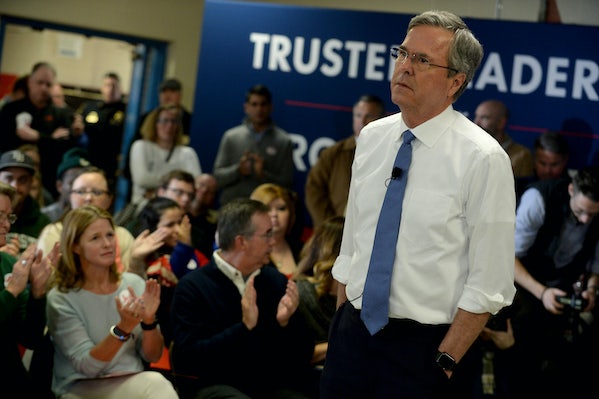 Jeb! finds a couple people to clap for him after all.

While Jeb Bush’s final week of campaigning in New Hampshire was punctuated by moments of comic sadness, the former Florida governor pulled in 11 percent of the vote, with 58 percent of the precincts reporting. That put him in fourth place, wedged between Ted Cruz and establishment rival Marco Rubio—enough to keep him going to South Carolina.

Speaking to his supporters on Tuesday night, Bush stressed his credentials as an anti-abortion, pro-Second Amendment, small-government candidate, vowing, “I will be a conservative candidate, embracing conservative values.” But as the New Republic’s Jeet Heer argues, that pitch has not been working for Jeb so far: “The GOP is so fragmented that the Bush style of Republican fusion politics can no longer unify. Beyond that, the hard right of the party no longer trusts the Bushes of the world.”

Bush made sure to include an indirect dig at New Hampshire victor Donald Trump: “We need a president with a steady hand, with a proven record, who has a service arc, who doesn’t believe it’s all about them.”

But Trump, as usual, got the last word: As Bush took the stage, the networks and NPR all cut to Trump’s victory rally. Poor Jeb. Again.