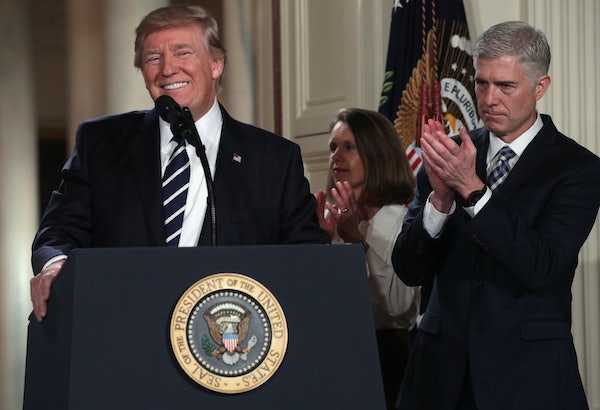 Trump gave conservatives Gorsuch. Was it worth it?

The president was supposed to announce his pick for the Supreme Court on Thursday. But the announcement was moved up two days because Trump and his cronies had screwed up practically everything there was to screw up in the first week and a half of his presidency. Trump not only united the opposition with overreaching and discriminatory executive orders, but also seemingly unraveled his delicate coalition of anti-globalists, social conservatives, libertarians, anti-tax warriors, and all the other weirdos who vote Republican. Something’s up if the Koch brothers and the ACLU are on the same page when a Republican is in the White House, but something’s really up when they’re on the same page a mere week into that Republican’s term. (The ACLU and the Kochs last teamed up to fight for criminal justice reform because the Kochs think that criminal justice reform will keep rich people out of jail for polluting stuff.)

Judging by the embarrassing response on cable news, and by the early reactions from every corner of the Republican base, Trump’s selection of Neil Gorsuch on Tuesday evening had exactly the intended effect. On CNN, pundits and reporters alike cooed over just how presidential Trump’s announcement was—“That’s how it’s done!” in the words of Dana Bash. It was a return to the incredibly low bar that was set for Trump over the course of the entire primary and most of the election—Trump didn’t make a pass at Gorsuch’s wife or drop his pants, after all!

Trump didn’t deserve a palate cleanser after all that he’s done, but that’s exactly what he got. This was a big political win for Trump. It effectively reset relations with many Republicans inside and outside of Congress. Those Republicans will now also unite against the maelstrom Democrats have pledged to unleash. (And let’s be real—it probably won’t be unleashed.)

The nomination of Gorsuch was the fulfillment of the devil’s bargain that many conservatives made with Trump. He may be a tyrant in training, but at least he’ll put a staunchly conservative justice on the bench who will undo the regulatory state and, if they’re lucky, Roe v. Wade! But judging by Trump’s actions in his first ten days in office, he will also hold up the other part of the bargain.

This was the deal conservatives made. You elect a little Berlusconi and hope he isn’t an Orban or Putin (or worse) because you get someone like Neil Gorsuch on the bench. The honeymoon may last for weeks, if not months. All the regrets and doubts have been momentarily forgotten. But they will bubble up again—that is, until Anthony Kennedy retires.