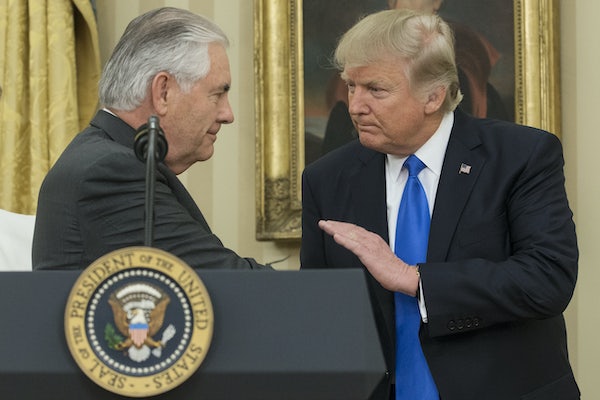 In between baselessly accusing former president Obama of wiretapping his phones and issuing Muslim Ban: The Sequel on Monday, President Donald Trump took some time to fawn over the largest oil company in the world. At approximately 3:45 p.m., the White House issued a press release congratulating Exxon for investing $20 billion to expand its own chemical and oil refining plants on the U.S. Gulf Coast.

It makes perfect sense that a Republican president whose secretary of state is the former CEO of Exxon would formally praise the company for creating oil and chemical jobs. But there is something particularly gross about this blatant act of plagiarism, in that it cements how close the Trump administration is with the oil industry. It is not even the first instance someone in Trump’s administration has copied and pasted language directly from fossil fuel companies. When now-EPA Administrator Scott Pruitt was Oklahoma’s attorney general, he once received a letter from the oil company Devon Energy, put his own letterhead on it, and sent it to the EPA.