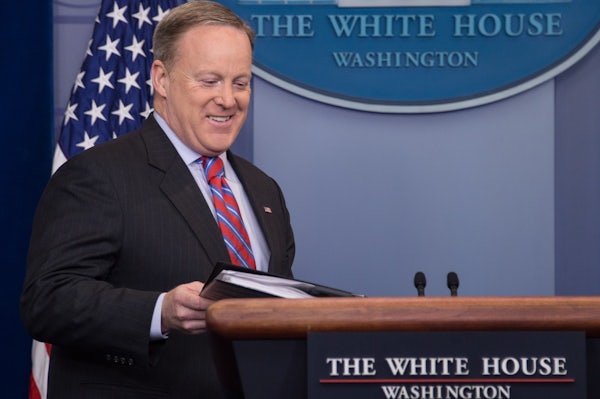 The White House’s message on Trumpcare is all over the place.

The problem for the White House is that practically every partisan and nonpartisan organization—most recently the Congressional Budget Office—says the bill is terrible. Sean Spicer’s job is to go out and say that what’s bad is actually good, and he just doesn’t have any ground to stand on here.

Let’s start with the “prongs.” Spicer’s main defense on Tuesday was that the bill is being misinterpreted because of the “prongs.” Translation: This is only the first step in repealing and replacing Obamacare, and there will be two more steps, er, “prongs” before the process is complete. Here’s Tom Price, arguing that this is a fork bill, not a chopstick bill, or something:

Tom Cotton of all people destroyed the “prongs” theory today, noting that at least one future “prong” would need the support of Democrats to break a filibuster in the Senate. (Trumpcare itself does not, because it can be passed through reconciliation.) Another “prong”—regulations written by Price at Health and Human Services—can be challenged in court. And at the moment, none of these non-existent “prongs” can be scored by the CBO or measured in any meaningful way.

That the White House is even making this argument is a very bad sign. Paul Ryan’s thus far unsuccessful strategy has been to point to allegedly good things in the bill, to steer the conversation away from “24 million people will lose their health insurance.” In contrast, the White House is pointing to “prongs” that don’t exist yet. This essentially concedes that the AHCA is a bad bill that makes people’s lives worse.

That explains the two other parts of Spicer’s pitch to save the AHCA. First, you have Spicer making the case that Republicans should get behind this bad bill because it’s their only chance of repealing and replacing Obamacare.

If “now or never” is one of your best arguments one week after you introduced a bill, you’re in serious trouble.

Then there’s Spicer contradicting one of Trump’s most important promises on the campaign trail: that everyone who has health insurance will continue to have it.

Many people voted for Trump because he promised to upset the health care status quo without disrupting their lives. Something like the opposite would happen if Trumpcare is passed—the health insurance companies will make out like bandits and millions of people, particularly older people, will get screwed over. The AHCA transparently makes things worse and no amount of spin—especially lame spin like this—can change the fact that the bill does not provide “insurance for everybody.” Hilariously, it doesn’t even achieve Spicer’s downgraded promise of “insurance for everybody who wants to get it.”