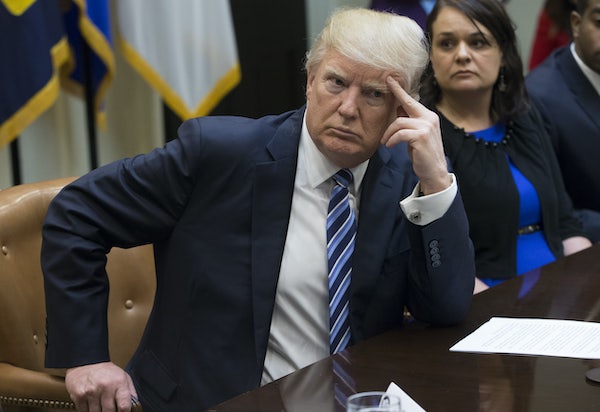 The news out of Wednesday’s national survey from Public Policy Polling was that less than a quarter of voters (and only 37 percent of Republicans) support the American Health Care Act—Trumpcare, Ryancare, or whatever we’re calling it this minute. But Trump’s troubles with public opinion are much bigger than that.

Take his signature campaign pledge. “There continues to be strong resistance to the wall with Mexico if American taxpayers end up having to fund it,” the survey showed. (And yes, we will end up paying for it.) “Just 37% of voters support the wall if we pay for it, to 55% who are opposed to that. Even more unpopular is the concept floated last week of having the wall paid for by cuts to funding for the Coast Guard, Transportation Security Administration, and Federal Emergency Management Agency—just 16% of voters support making reductions in those places to build the wall, with 69% against.”

Trump is also losing his “FAKE NEWS” war against the “failing” New York Times and “terrible” CNN: “Voters say that the New York Times has more credibility than him, 53/35, and that CNN has more credibility than him, 53/37.” And, in perhaps the most devastating finding, 52 percent of voters would rather still have Barack Obama in the White House, versus 43 percent for Trump.

The president couldn’t even find support for his personal dietary policies. “[B]y a 27/56 spread, they disapprove of using ketchup as a condiment on steak. This is a rare issue where even Donald Trump’s own voters abandon him on something—only 34% of them approve of ketchup on steak to 52% who disapprove.”

There may be hope for humanity yet.