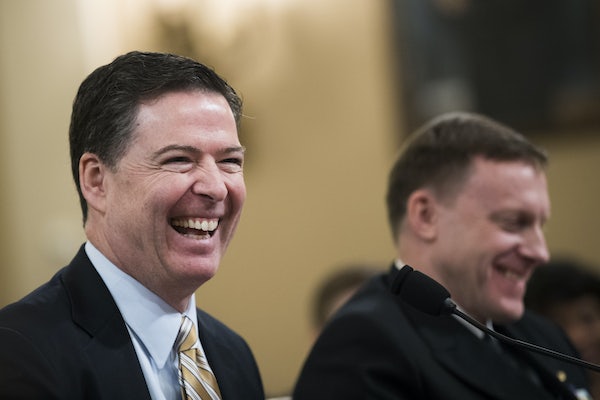 The GOP is going to try to rush the Russian investigation. Democrats shouldn’t let them.

The first day of the House Intelligence Committee’s hearings on Russian involvement in the 2016 election was full of bombshells. FBI Director James Comey announced that the FBI had been investigating Donald Trump’s campaign since mid-2016. By doign so, he also essentially obligated himself to keep the country up to date with the FBI’s findings. Comey also said that, contrary to Trump’s claims, Barack Obama had not wiretapped Trump Tower during the election. And Trump lied on Twitter while the hearings were ongoing, falsely claiming that Comey and NSA chief Mike Rogers testified that “Russia did not influence electoral process.”

It was not, in other words, a very good day for Donald Trump, or for the Republican Party in general. They will now have to answer questions about an ongoing FBI investigation for months, and Trump’s stubborn and insane refusal to admit his wiretapping tweets were trash continues to have serious real-world consequences.

Many of the initial attempts to spin this disastrous day on the Hill fell flat. Drudge mostly focused on secondary concerns, like the fact that Comey confirmed that Russians didn’t affect the vote totals, which has never been an important factor in the Trump-Russia story. And Fox focused on the leaks, which are not and have never been the most important aspect of this story.

But by the end of the day, Republicans had hit upon their strategy. “The longer this hangs out there, the more the cloud grows,” House Intelligence Committee Chair Devin Nunes said to Comey near the end of the hearing. The suggestion was that Comey—not Trump—had put this cloud over the White House. This is a remarkable thing to say, given that it’s Trump’s campaign that is under investigation for its ties to Russian intelligence. But the subtext is clear: We’re going to apply political pressure to try to get you to wrap this up quickly. Shortly after the hearing ended, notable Google result Rick Santorum concurred that this strategy was the way to go on CNN.

Nunes also hinted that he would do his part to keep the House’s own investigation shallow and quick. He indicated that he was not interested in investigating people like Carter Page, Roger Stone, and Paul Manafort, all of whom have ties to Russia and Trump. (Incredibly, Nunes told Mother Jones reporter David Corn that he had no idea who Page and Stone were.) He suggested the investigation would be limited primarily to current White House personnel, which would drastically reduce its scope and kneecap the committee’s ability to get to the bottom of what really happened during the campaign.

Who knows what Donald Trump thinks about any of this. He’ll give a speech tonight and will tweet tomorrow and that could change everything. But if it were up to the GOP, it seems clear that their plan is to try to rush the House’s investigation—and to pressure Comey and the FBI to rush theirs.