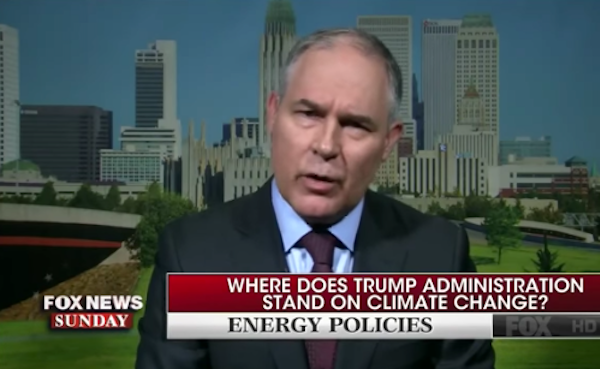 It may be hard to believe, but right-wing conservatives haven’t been too happy with the Environmental Protection Agency administrator. They like that he denies the scientific fact of human-caused climate change, and that he’s all-in on dismantling President Barack Obama’s regulations on carbon emissions from coal plants. But they don’t like that Pruitt has reportedly pushed back on President Donald Trump’s request to revisit the endangerment finding, the single piece of EPA legalese which allows the agency to regulate greenhouse gas emissions. And they’re not pleased with the fact that Pruitt has openly disagreed with some of Trump’s proposed cuts to the agency.

But it appears Pruitt is giving in to the pressure. In an interview with Fox News’ Chris Wallace on Sunday, Pruitt was asked to defend the administration’s proposed 31 percent cut to the EPA, one of the largest in agency history. Just weeks ago, Pruitt said he wasn’t even on board with a 25 percent cut. But on Sunday, he dutifully defended the 31 percent cut, saying state governments would make up the shortfall. “We have state departments of environmental quality that have the resources and the expertise to deal with clean water and clean air issues,” Pruitt said.

This still isn’t enough for Breitbart. On Sunday, the alt-right site’s chief environmental writer skewered Pruitt for not forcefully denying the science of climate change on Wallace’s show. James Delingpole wrote that Pruitt “sweated, stuttered, and floundered,” and that he failed to point out “the incompetence, corruption, and mendacity” of world-renowned scientific institutions like the National Oceanic and Atmospheric Administration. “I’ve reported before on the worrying signs that Scott Pruitt may not be up to the job of EPA Administrator,” Delingpole wrote. “His performance on Fox seems only to confirm it.”