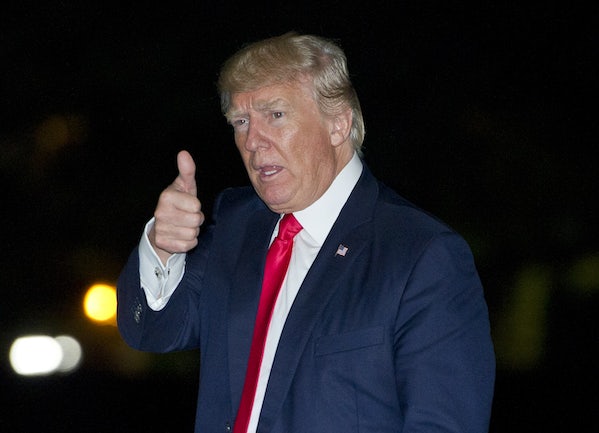 The new budget agreement is a big loss for Donald Trump.

There are two ways of looking at Trump’s role in the $1 trillion budget deal reached by Congress on Sunday evening—a deal that does not include funding for The Wall, does include funding for Planned Parenthood, and reportedly protects 99 percent of the EPA’s budget. The first is that it’s a sign that, after 100 tumultuous days, Donald Trump just wants to put points on the board—that he’s more willing to compromise than previously thought. The second is that Trump—who tried to insert himself into the negotiation process with wild threats to shut down the government his party controls—is an even worse negotiator than previously thought. His demand, broadcast on Twitter, for a deal that funds The Wall either hurt Republicans’ negotiating position or was never taken seriously in the first place.

Both, of course, can be true. Like countless politicians before him who ran on promises to shake up Washington, Trump has clearly realized that governance is more complicated than he expected it to be. When it has come to NATO, Syria, and China—among other things—Trump has been willing to take actions that he can present as victories, even if they contradict campaign promises. That may stem from the fact that Trump is, as the presidential cliche goes, growing into the job. But it more likely stems from desperation. Trump is phenomenally unpopular and simply lacks the political capital to be a bull in a china shop.

Of course, Trump did try to be that proverbial bull during the budget negotiation, and it got him nowhere. We’ve seen Trump’s negotiating technique again and again in his first 100 days. Trump makes a huge demand that is coupled with a threat. This demand derails the negotiation for a day or two. The situation is then resolved either when Republicans back down—effectively acknowledging that Trump’s threat was a bluff—or ignore it altogether and compromise.

Trump will very likely present this budget deal as a win, and try to use it as a runway for more complicated legislation, like health care and tax reform, that has no hope of bipartisan support. A spokeswoman for the House Appropriations Committee, Jennifer Hing, told The New York Times that, “The agreement will move the needle forward on conservative priorities and will ensure that the essential functions of the federal government are maintained.”

But everything that we’ve seen from this budget deal suggests otherwise. Trump tried to influence the budget negotiations and got nothing that he wanted. He was irrelevant to the final product—if anything, he was a hinderance to the deal.