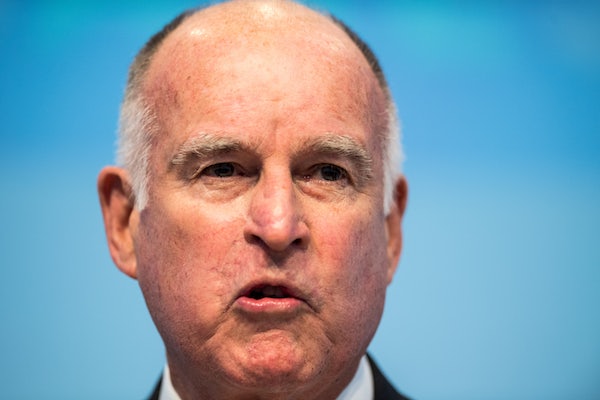 The California governor has been a breath of fresh air at the ongoing United Nations Climate Change Conference in Bonn, Germany. As Trump administration officials have been roaming the halls selling coal as a viable climate solution and encountering protesters at every turn, Brown has been promoting his state’s impressive carbon emissions reductions and huge scale-up in renewable energy. “We can’t just wait for our national leaders—we need to take action together,” Brown said to applause.

But Brown drew protests of his own. Several attendees representing environmental justice and Native American groups disrupted Brown’s official remarks on Monday, calling on him to ban fracking in the state, a controversial practice for extracting oil and gas from underground. As they chanted “keep it in the ground,” Brown gave a snarky response: “Let’s put you in the ground.”

The remark was a joke, he later said in an interview with Democracy Now’s Amy Goodman. Fair enough. Less acceptably, however, he essentially dodged Goodman’s legitimate question about why Brown hasn’t banned fracking in the state.

The entire exchange is worth watching in full, but the key point Brown harped on is that he doesn’t believe protesters actually want him to stop fracking. “They’re calling for a ban on all oil production,” Brown said, clearly annoyed. “I’m talking about reality,” he added. “If someone wants to say oh, get rid oil, you mean get rid of our cars. If you got rid of cars, there would be a revolution, and there would be shooting in the streets.”

But as Goodman pointed out, protesters are indeed calling on Brown to ban fracking, which has caused environmental problems in California affecting mostly low-income, minority populations. “What is your approach to that?” Goodman asked. Brown: “I don’t think it makes sense to import oil by train. It’s very dangerous. And people are saying, don’t take oil out of your ground, bring it by train or by boat. That’s far more dangerous.” Brown also said he’d rather oil come from California, which has the toughest rules on fracking in the nation, than elsewhere. These are good points, but they fail to address why the oil has to come from fracking.

Other states that are widely seen as environmental leaders have banned fracking. “What about New York and Maryland?” Goodman asked. “Yeah,” Brown said, “because they don’t have the same situation.” He went on:

Brown: This is just a little left-wing routine here.

Goodman: I don’t think fracking—fracking is a very serious issue.

Brown: Fracking is very serious, and horizontal fracking is very dangerous and uses ten times the water. And in California it’s a very small part. What I’m talking about—we’d like to get rid of all oil drilling. But we have to do it is a systematic way, reducing the demand, and not just the supply. Because if you don’t reduce the demand, we’ll get the supply by boat, and by train. And that is really dangerous to human beings. People die from the bringing of oil. So that’s the honest truth. I don’t know whether that’s something you want to deal with. But I’m telling you the way it is.

Brown has legitimate gripes here. An immediate ban on all fossil fuels is indeed unrealistic. Domestic production is better and safer than importing from other states or overseas. And Brown is taking extremely commendable actions to reduce not only California’s supply of fossil fuels, but the demand for them—a necessary action if the U.S. is ever going to transition to a clean-energy economy. In many ways, Brown deserves a lot more credit than some environmentalists are willing to give him.

But none of this actually answers why California’s oil production must be achieved by fracking instead of conventional methods. Is it because California can’t get enough oil from conventional methods to meet demand? Does Brown prefer some oil production to come from fracking because fracking often emits fewer greenhouse gases? Are the economic benefits of fracking too lucrative to give up? Californians, at least, deserve a straightforward answer.