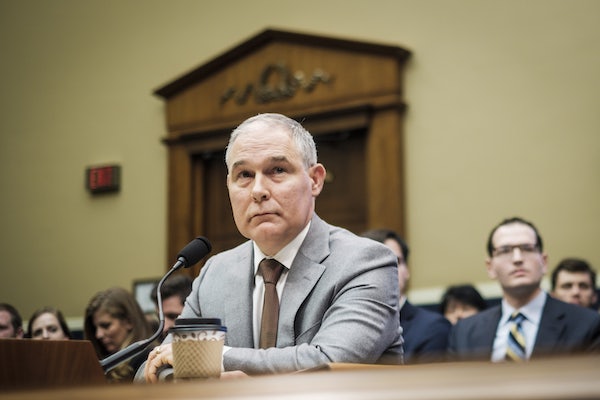 Scott Pruitt is doing a good thing for once.

During his first-ever congressional oversight hearing on Thursday, the EPA administrator disclosed a surprising fact: The agency will hold more public hearings on its proposed repeal of the Clean Power Plan, former President Barack Obama’s regulations to limit carbon emissions from the power sector.

Pruitt’s disclosure comes one week after the agency held its first public hearing on the plan in the heart of coal country—Charleston, West Virginia—to hear from the people Pruitt said were “most affected” by the regulations. This drew strong criticism from people who live in largely poor, minority communities located near coal-fired power plants, who would likely see health improvements if the plan were to remain in place. Believing last week’s hearing would be the only opportunity for members of those frontline communities to speak publicly, national groups like the NAACP paid for people affected by pollution to fly in and testify. “The EPA made this difficult for us,” said Kayla Cox, who said she’s affected by coal ash pollution in her home state of North Carolina. “It makes us think they genuinely do not care to have our input about what coal does to our quality of life.”

These subsequent hearings likely won’t change Pruitt’s mind; he’s made clear he wants to repeal the Clean Power Plan. But there is value in the rest of the country hearing from more members of these affected communities. The hearing in Wyoming may not draw many such people—it is a coal mining state like West Virginia, not a coal burning state—but the Kansas City hearing could (although it would have been more prudent to hold it in neighboring St. Louis, a city that has suffered significant environmental problems from Peabody Coal). And Pruitt will probably face a hostile audience in San Francisco, the liberal heart of climate-friendly California.

The EPA had said that it would consider holding more public hearings on repealing the Clean Power Plan, but many observers—me included—were skeptical. I’m happy to have been proven wrong.