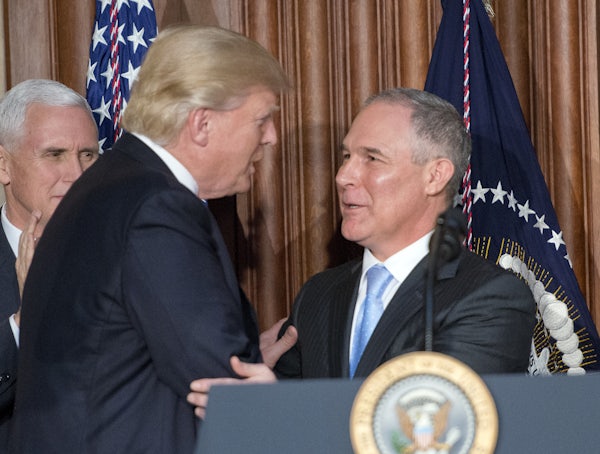 There’s a growing belief that the president might fire his Environmental Protection Agency administrator as a result of Pruitt’s potentially unethical living arrangement with a top energy lobbyist’s wife. According to CNN, senior White House aides are “exasperated” with the drama surrounding Pruitt’s $50/night rental agreement with the wife of J. Steven Hart, who has contributed to Pruitt’s political career and whose firm lobbies for the export of liquefied natural gas. An anonymous EPA source told CNN that Pruitt’s “goose is cooked.”

The Washington Post’s Aaron Blake wrote that the situation “looks really bad” for Pruitt and “carries more than a whiff of a sweetheart deal.” Former Trump adviser Chris Christie speculated similarly in an interview on Sunday: “I don’t know how you survive this one,” he said, adding to a chorus of cries from Democratic lawmakers.

Pruitt reportedly rented the room in the Capitol Hill condo, which Vicki Hart co-owns, on an as-needed basis. Though ethicists have said the arrangement raises red flags, career employees in the EPA ethics office have already said Pruitt’s room was not technically considered a “gift.” Even if it were a gift, though, it’s hard to imagine that Trump—who has seemingly endless financial conflicts of interest of his own—would find it egregious enough to warrant firing him. Pruitt is also said to be “a favorite” of the president, and Trump tends to fire only the cabinet members he doesn’t get along with personally.